If you’ve been subscribed to my YouTube channel for a while, you know that I absolutely LOVE South Indian food. I’ve eaten it in India, in the states of Karnataka, Kerala, Telangana, and Tamil Nadu. But with India still closed to American travelers during the pandemic, I had to get creative to find another way to get some. For this super-sized episode, I teamed up with my boy Carlos from Volpe, Where Are You to eat nothing but South Indian food in Tampa for 24 hours! Come along with us on our wild, day-long eating South Indian food adventure!

Both Carlos and I are massive fans of Indian cuisine. We’ve both visited India multiple times and have explored dozens of Indian cities between us. One of our favorite things about the country is the food, especially the food that’s endemic to southern India, which includes dosas, idli, uttapam, and tons of mouthwatering seafood curries. The food is truly next level and it’s fair to say we’re both addicted to it, which is why we wanted to spend an entire day eating it! 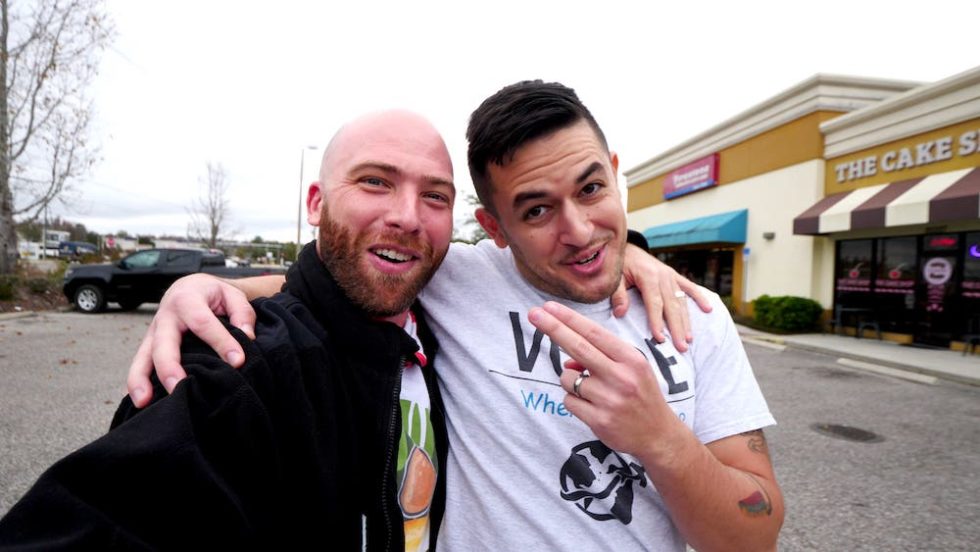 Our entire eating south Indian food adventure takes place in the city of Tampa, which is a few hours northwest of our hometown of Miami. Over the course of the day, we’d hit up three South Indian restaurants to bring you 24 hours of South Indian food goodness! 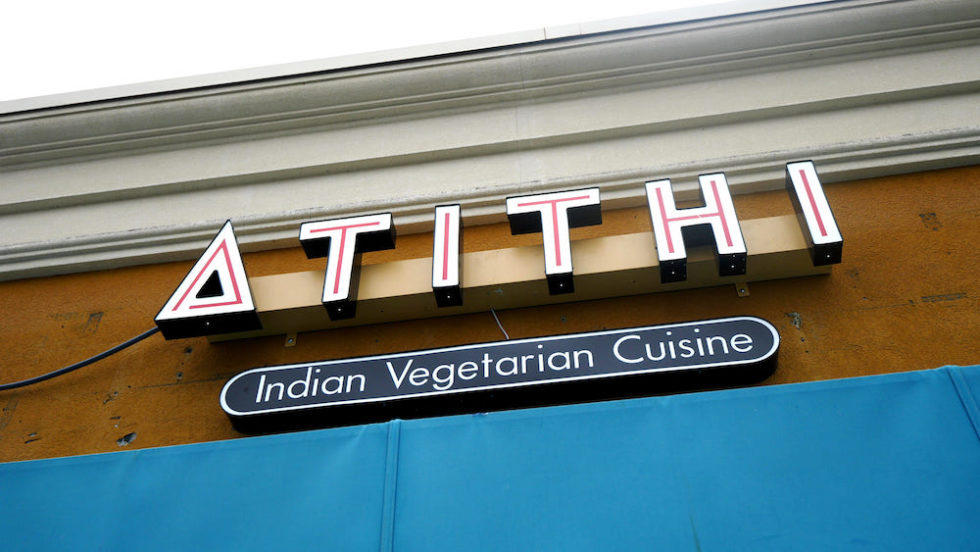 Carlos and I started with a late breakfast at Atithi Indian Vegetarian Cuisine. Most Indian restaurants in the United States don’t open until 11 a.m., so this was more of a brunch than breakfast! The inside of the restaurant transported me back to India—it even smelled like it! 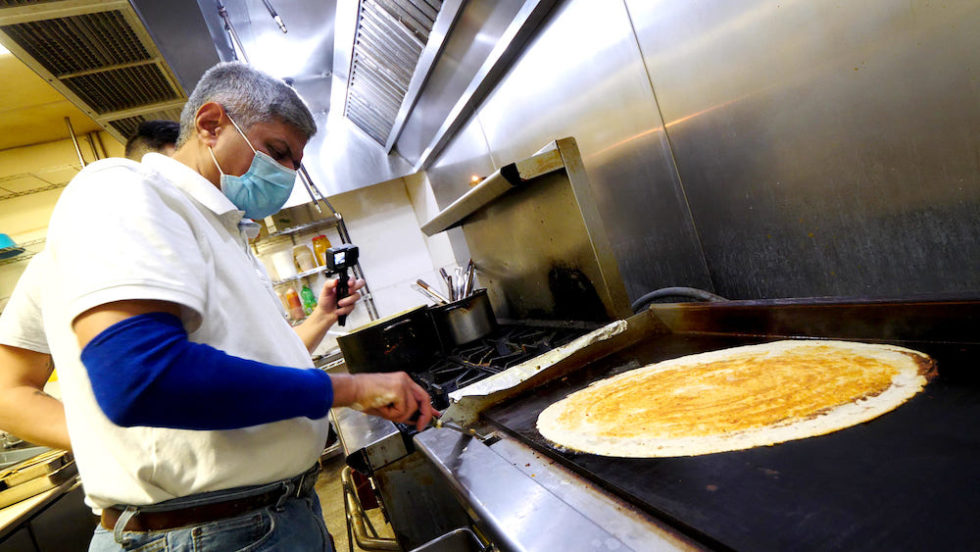 After going over the menu, we decided on some dosas and idli. They have tons of bottles of Indian beer on the walls, including Power 10,000, which is one of my favorites. They also have wines! 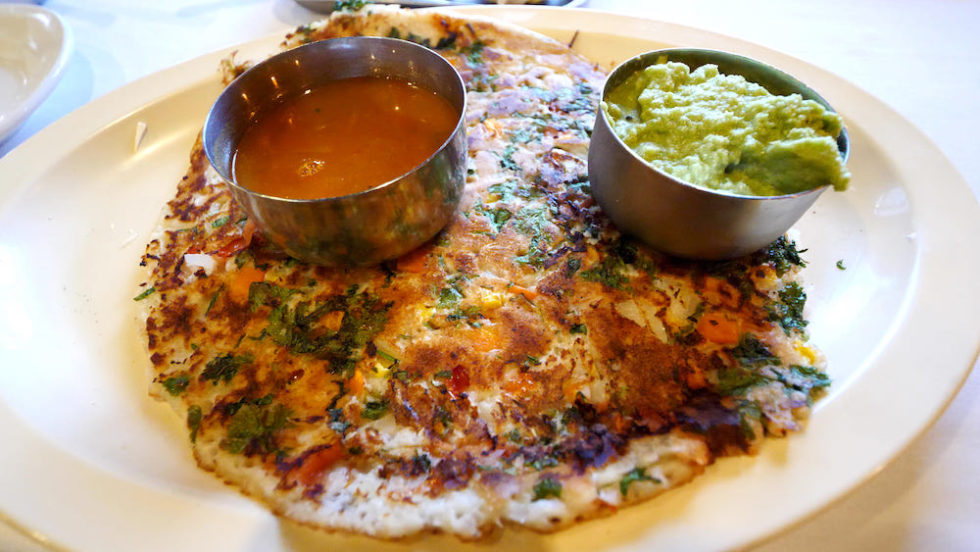 Then, we watched them make our plain dosa, paper dosa, uttapam, and Mysore masala dosas in the kitchen.

Check out the Top 10 Things to See and Do in Hyderabad, India 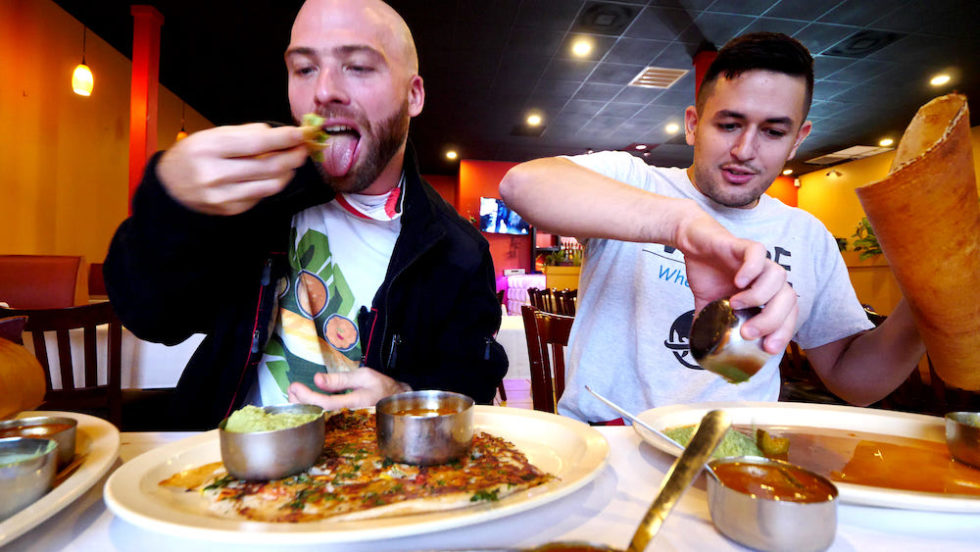 Then, I jumped on the idli, which I loved with the sambar and the chutney. They’re almost like a Venezuelan arepa! The uttapam was super fluffy and filled with tasty vegetables. It was too good! This is my favorite breakfast of all-time! 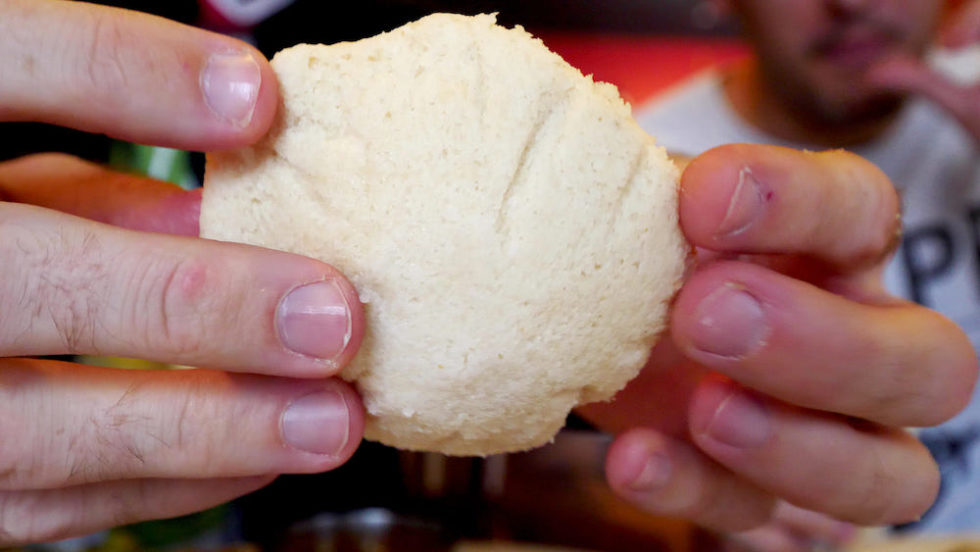 By the time we finished, we only had 30 minutes until lunch! Tampa is an Indian food hub with over 50 Indian restaurants! Comparatively, Miami only has about 15. We made it to the downtown area, which reminded me of Tallahassee. There were some roosters running around! 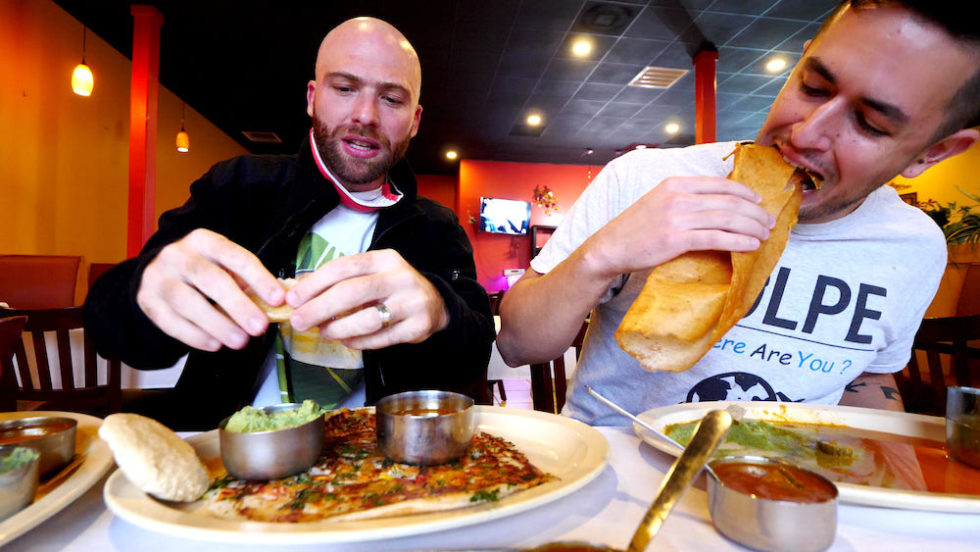 We made it to Rasoi Indian Cuisine, where the waitress is from Sivasagar in the state of Assam! We started with some delicious chai, which as always, is served piping hot!  It was really good with some crumbly Indian biscuits! 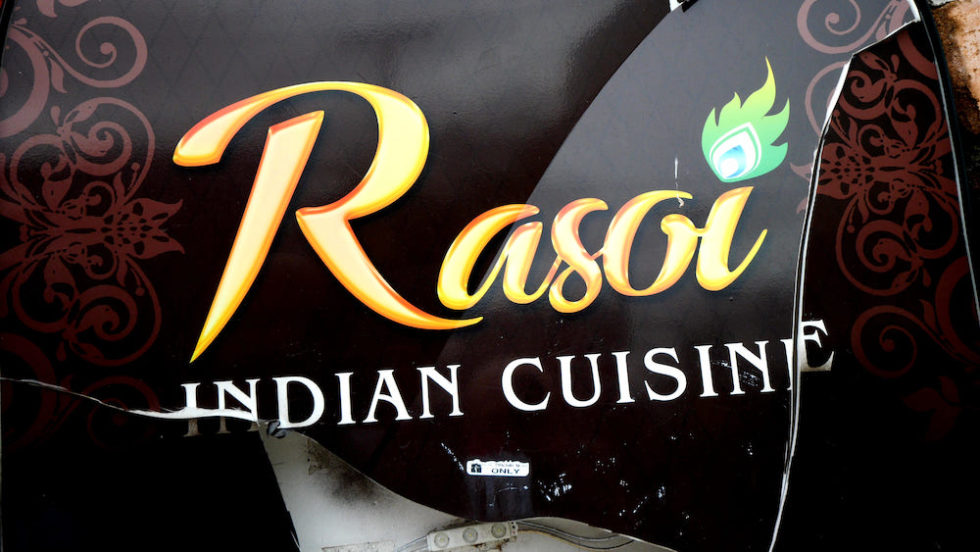 In their spotless kitchen, we met the cook, who is from Pune in Maharashtra. They made us some prawns, kebabs, chicken, gobi Manchurian, and more! The gobi Manchurian is an Indochinese dish that consists of cauliflower with a delicious sauce, peppers, and onions. We also had a mixed grill with lamb, prawns, and chicken. We also had some Sula wine from just outside of Mumbai, mint chutney, and tamarind chutney.

Check out the Top 5 Things to Do in Sivasagar in Assam, India

The prawns were succulent and tender and smoky from the tandoor. The lamb kebab was also tender and smoky, with a texture reminiscent of beef tartare. I also loved the gobi Manchurian, which was covered in a sweet and sour Chinese sauce with a spicy kick! The chicken with tamarind chutney was also insanely good, as was the heavenly mint chutney. 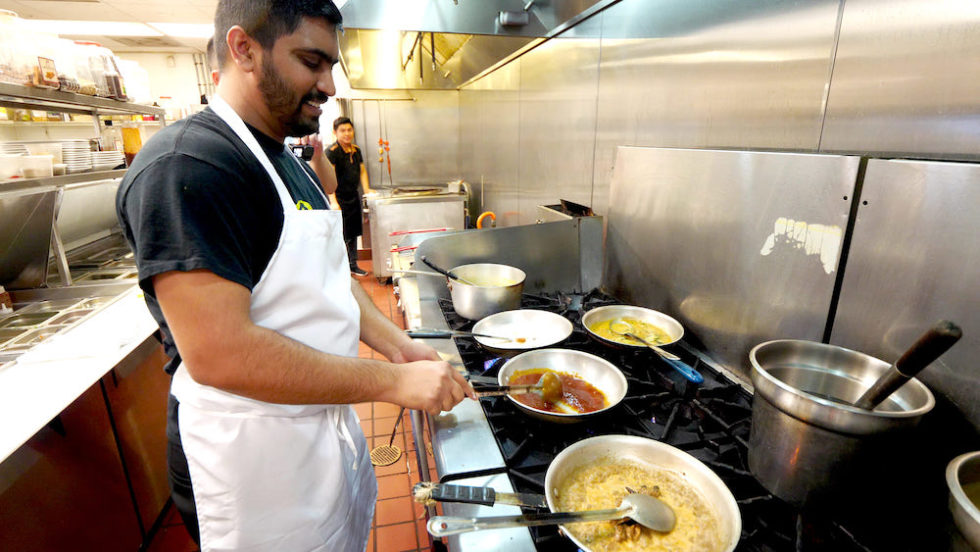 Next were 8 more dishes, including shrimp vindaloo, butter chicken, chicken tikka masala, lamb chettinad, paneer kadai, goat biryani, garlic naan, rice, chutneys, and more! We got a little bit of everything and dove in with our hands. 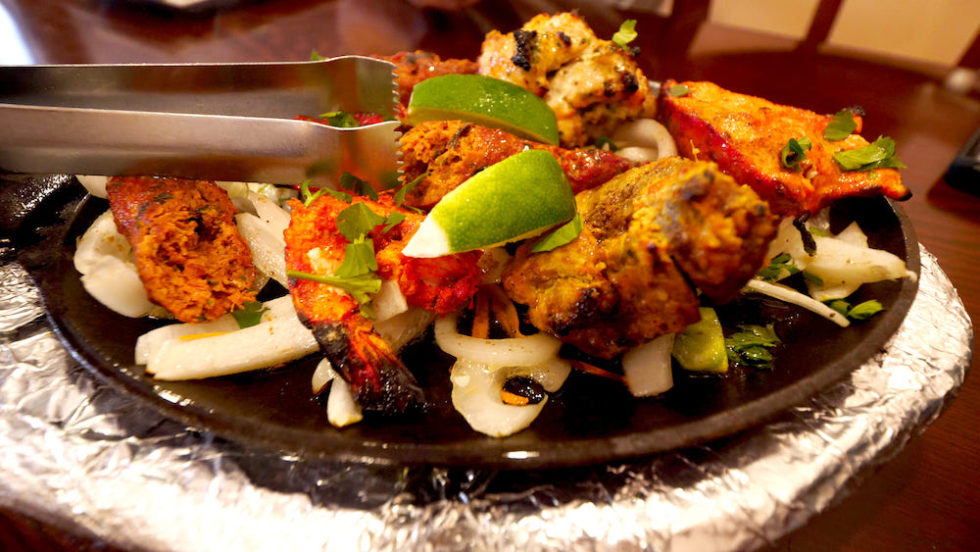 The goat biryani was amazing with the mint leaves. It was the best biryani of all time! Next was naan with the butter chicken, which was so buttery and creamy! The lamb chettinad was full of coconut and curry leaf flavor, and the shrimp were really spicy! 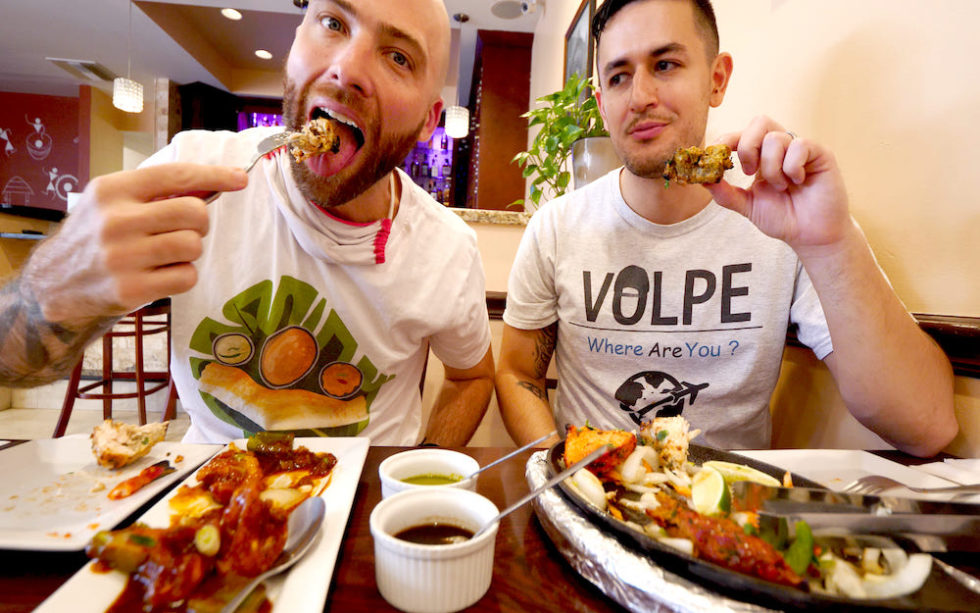 I loved the contrast in all the flavors and textures on my plate! The paneer kadai was light with a gingery gravy with peppers and onions. Then I added rice to the rest of my sauces and ate it before finishing up with the wine! 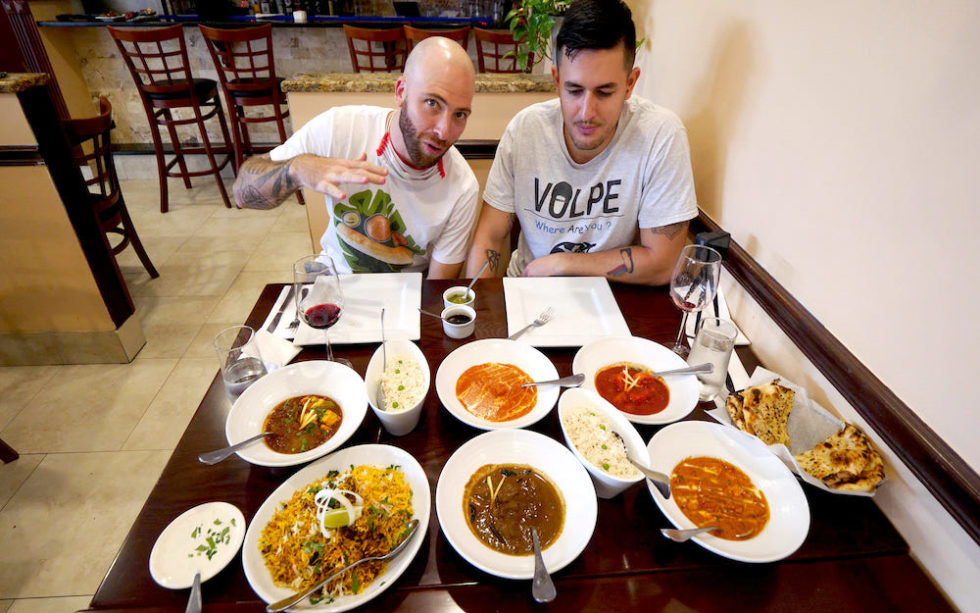 Two hours later, we headed to Curry Leaves Restaurant, which specializes in food from Kerala! It’s connected to a gas station. In the kitchen, they made an Alleppey shrimp curry, paneer tikka, parottas, tandoori shrimp, biryani, a masala dosa, onion kulcha, and more. It’s a big feast, and eating south Indian food for 24 hours is no joke!

Check out the 25 Indian Street Food Dishes You Must Eat in Kerala, India

Our feast was massive! We started with the chicken lollipops as they brought us some sev puri chaat. I was in love with the chicken, which was covered in a sweet and sour glazy sauce and lots of herbs. The sev puri chaat was unreal. Then, we went for the parottas with the Alleppey shrimp curry. The parottas are so flaky and the prawns are massive! It tasted just like back in Kerala! 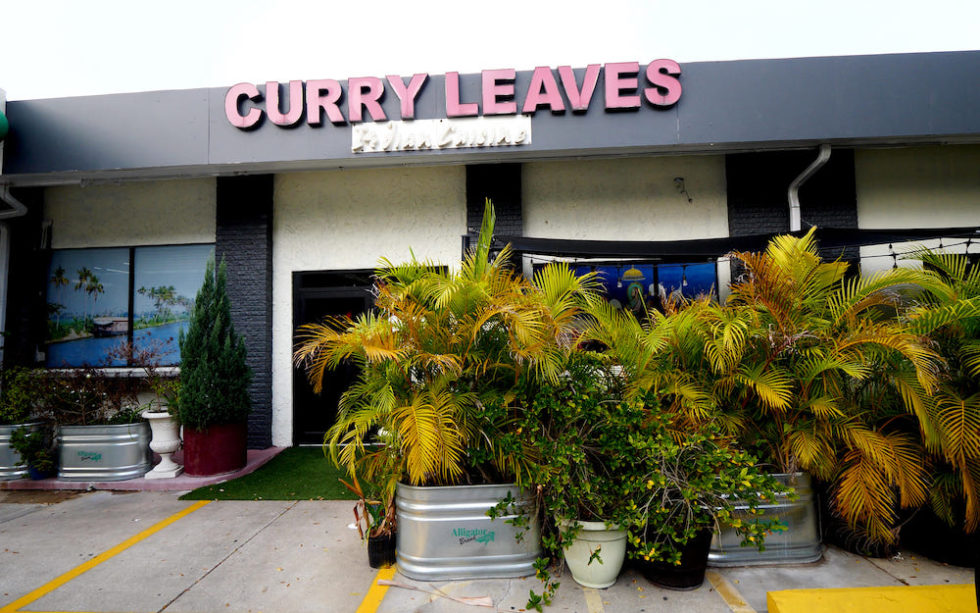 Next was the meter-long dosa with coconut chutney, which was super rich and different! It was like coconut chutney mixed with tomato chutney and sambar! The sambar was thick, tasty, and filled with roasted vegetables. We also had a mango lassi. 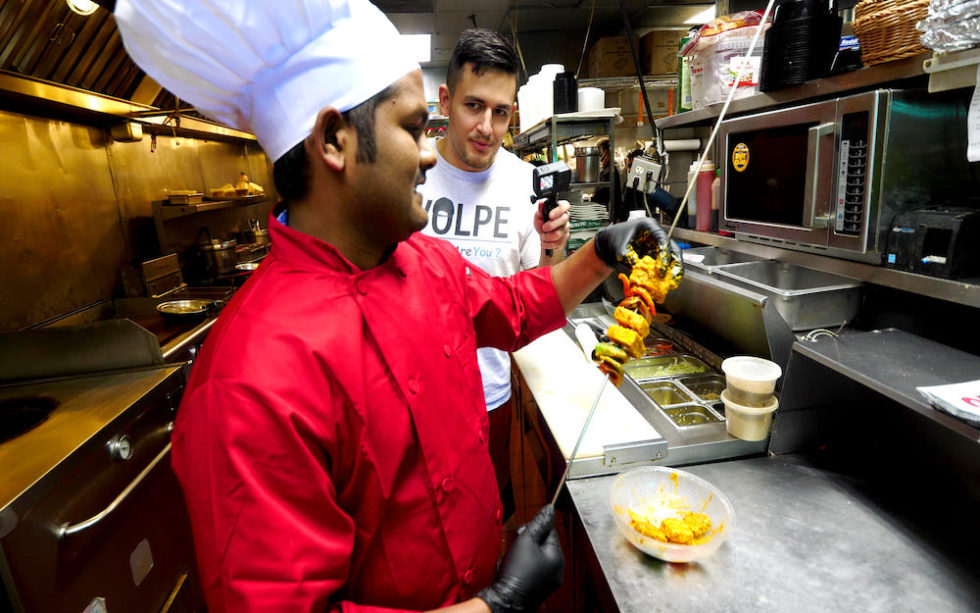 Next was an appetizer made with spinach wrapped around cottage cheese and down in a creamy tomato sauce. It was like a paneer roll wrapped in spinach! The mushroom saag with spinach with parottas was an amazing combination. 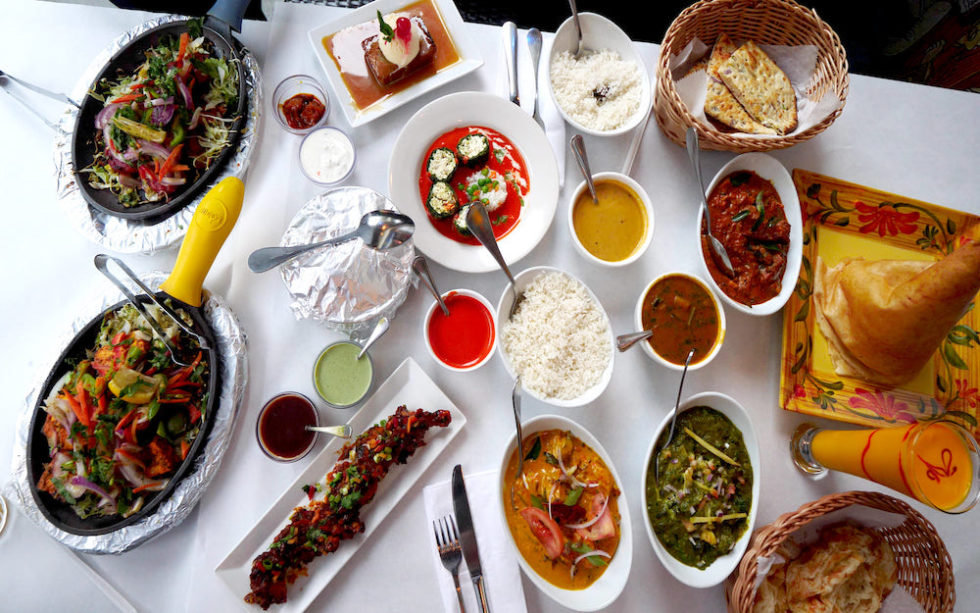 The chettinad chicken was full of coconut and curry leaves. I loved how flavorful and peppery it was! The paneer in the sizzler was smoky and dense, while the shrimp was unbelievable. The biryani was up there with the one earlier in the day. We finished up with sweet, pink jalebi with pistachios on top, and a type of cake with vanilla ice cream sitting in dulce de leche. It was so unique! 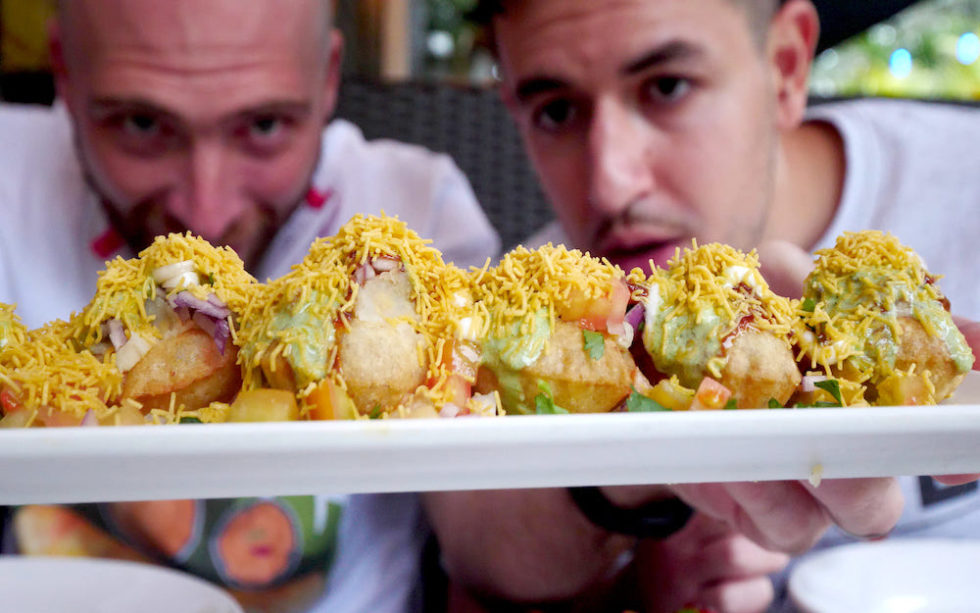 What an amazing day of eating south Indian food in Tampa for 24 hours! This was such a fun day with my boy Carlos. Huge thanks to him for coming with me on this epic food adventure! Be sure to follow him on Instagram and subscribe to his YouTube channel, Volpe, Where Are You for more incredible travel/food content! 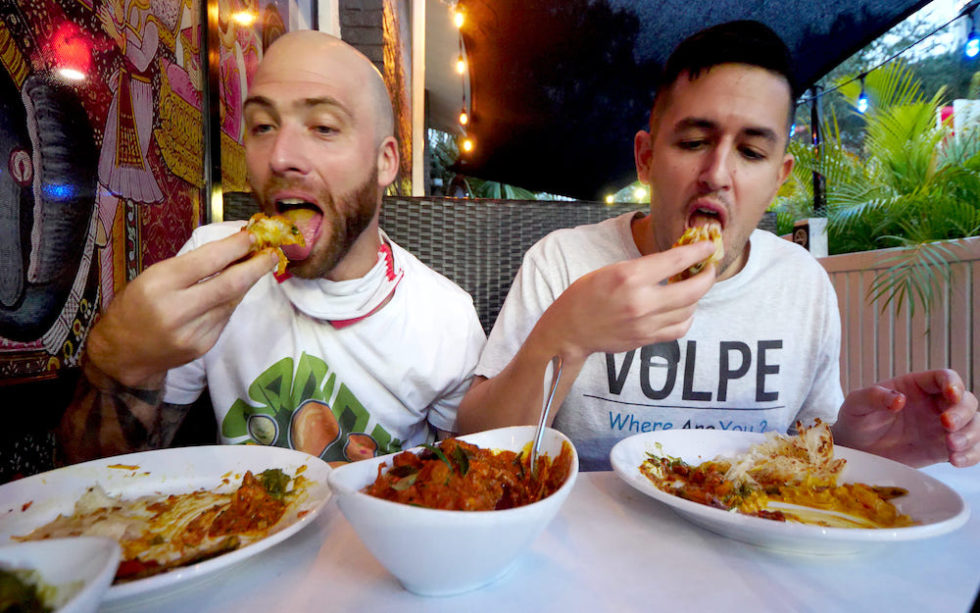 I hope you liked coming with me on my eating south Indian food adventures in Tampa. If you did, please give this video a thumbs up and leave a comment below. Also, please subscribe to my YouTube channel and click the notification bell so you don’t miss any of my travel/food adventures around the world!

Where have you been?