Traders Taking Profit? Why Bitcoin Needs To Overcome $64,000 For The Next Leg Up

After printing a green candle in the low of its current levels, Bitcoin seems well underway to resume its bullish trend. As of press time, BTC’s price trades at $63,324 with a 2.5% profit in the daily and sideways movement in the weekly charts, respectively.

In the latter timeframe, Bitcoin has been range-bound after it was rejected at the high of its current levels with some volatility during the weekend as the market reacted to a massive BTC Options expiry.

In the short term, BTC bulls displayed some strength and managed to break through the sell barrier placed at $63,000.

Now, the next major resistance sits at $64,000 with much fewer selling orders at higher levels until $70,000, according to data provided by Material Indicators’ Fire Chart for the BTC/USDT pair.

This suggests BTC’s price could quickly make a run towards that price target if it manages to flip its next resistance.

The chart shows the amount of resistance/support for the price of Bitcoin (represented in blue) indicated by the buying (below the price) or selling (above the price) orders.

In the short term, BTC could face some problems trying to get above $64,000 as selling orders at these levels seem to be swelling with much less support to the downside until $61,000.

In case of an increase in selling pressure, this level must hold, or Bitcoin could drop to its next major level of support at $58,000.

In addition to this data, Jarvis Labs reports a rise in the number of traders taking profits for Bitcoin and Ethereum at current levels.

Jarvis also noted no variation in derivatives funding rates, but a rise in Open Interest (OI). With the fall in long positions, this could suggest traders are positioning to the downside, at least for the coming days. 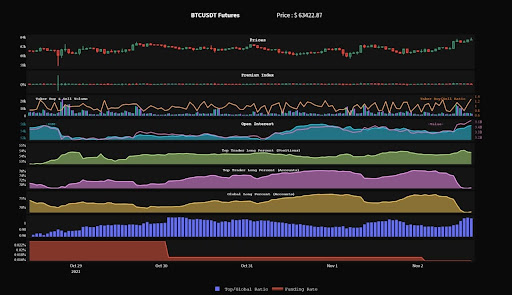 Bitcoin The Best Bet For The Next Decade?

In higher time frames, Bitcoin and the crypto market in general display bullish fundamentals and two major drivers, as QCP Capital pointed out. These drivers are creating incentives for major players in other sectors to enter the crypto market.

First, the firm claims there is low volatility in the Forex market due to the continuation of the Quantitative Easing monetary policy adopted by central banks around the world. This has been detrimental for the sector, as opposed to the highly volatile crypto market, QCP Capital added:

With every government now able to fund themselves with QE, there is less need for tapping cross-border markets which in turn leads to an unusually subdued FX trading environment.

Second, inflation is becoming a more important topic among investors. Thus, why so many are gaining exposure to Bitcoin and the nascent digital asset class attracted by its limited supply and artificial scarcity.

18/ As an asset class that is exponentially gaining traction and with largely limited supply (in many coins and tokens) crypto is quickly becoming a clear winner.