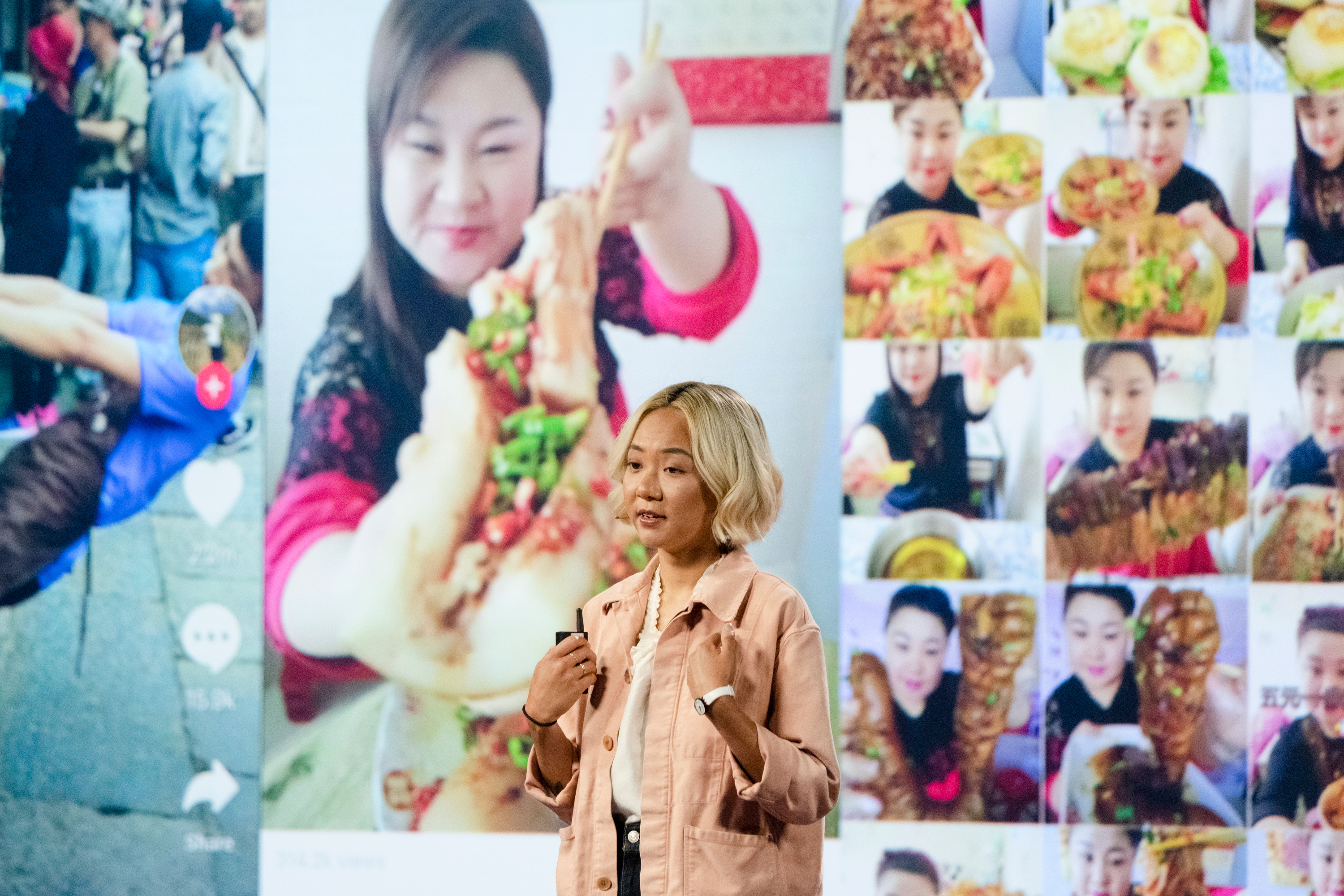 Some of the most thoughtful, careful innovation is happening in rural areas — not in big cities, says Xiaowei R. Wang. She speaks at TEDMonterey: The Case for Optimism on August 3, 2021. (Photo: Bret Hartman / TED)

Session 5 ushers in the astonishing, challenging and sometimes playful innovations that could mold the future. From genetic technology to NFTs, six speakers give insights on what’s to come, celebrate the fusion of tech and human creativity and make the case for rousing the techno-optimist in us all.

Special guest: Cognitive psychologist Steven Pinker, live from the TED World Theater, discusses the topic of progress with host Chris Anderson. Pointing to notable indicators of progress in modern society like the reduction of poverty, the increase in life expectancy and the decline of war, Pinker defines progress as the application of information to achieve the betterment of humankind. “Progress isn’t a miracle,” he says. “It’s a fact.” But that doesn’t mean it’s inevitable. In today’s world, we face two threats to progress: the loss of truth and knowledge, based in our increasing inability to have productive conversations, and the loss of the common goal of human betterment. With the rise of negatively biased media and populist, authoritarian politics, Pinker believes we need to leverage our rationality (over our irrationality) to safeguard the future of progress. 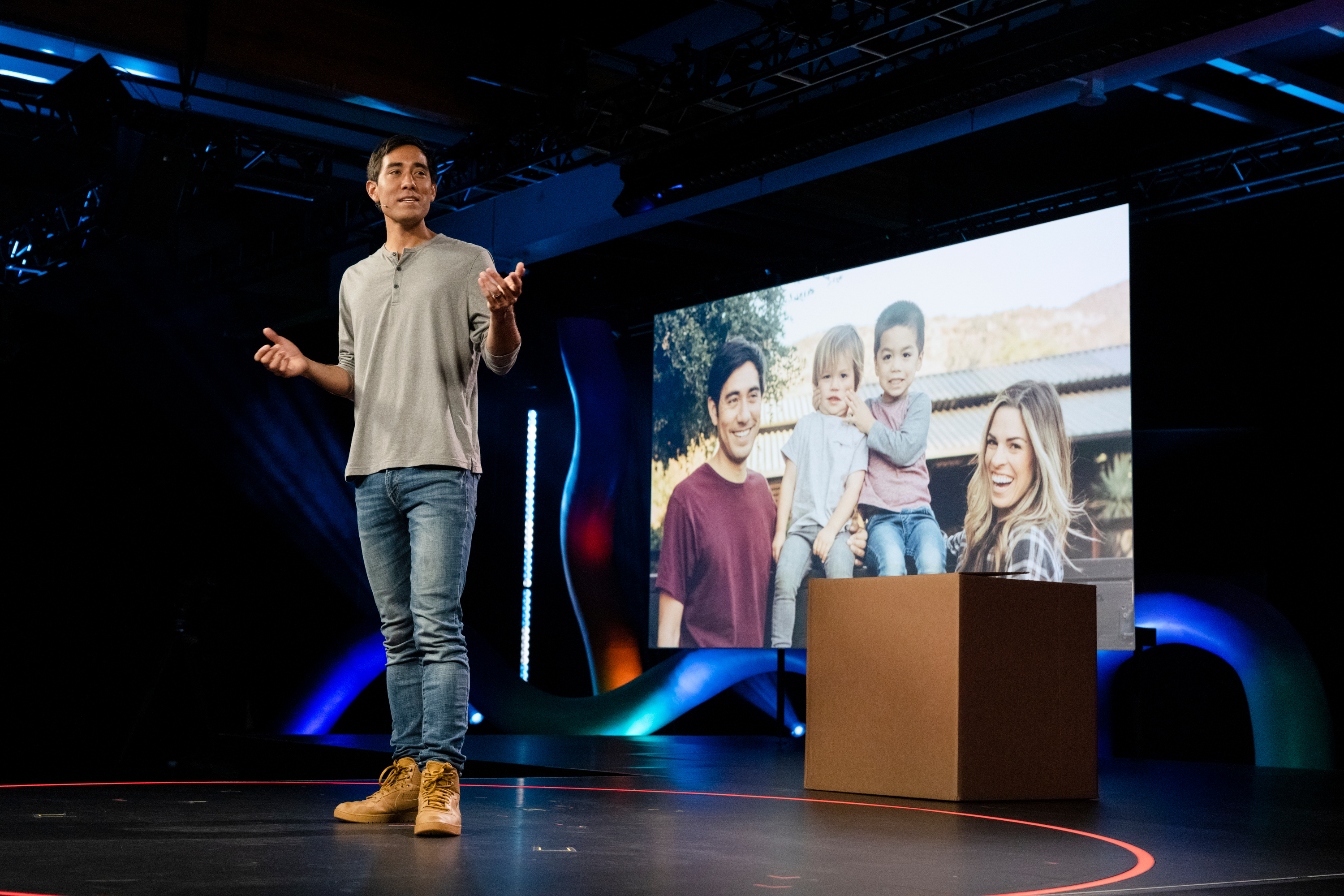 “If we can pause our assumptions, that’s when new ideas can enter the world,” says Zach King at TEDMonterey: The Case for Optimism on August 3, 2021. (Photo: Bret Hartman / TED)

Big idea: In need of a new idea? Start playing.

How? When Zach King was a kid, he got a bike for Christmas — but the box it came in was the real gift. It transformed into a time machine, a deep-sea submarine and even a secure bunker to hide from zombies during the zombie apocalypse. As King grew up, he lost his childlike wonder and his portal to endless awesome adventures turned back into a box — until he discovered his kids playing in one, exploring Jupiter and meeting friendly aliens. In a delightful talk, he brings his childhood imagination to life on and “off” stage using magic with a tech twist to remind us that creativity and fresh ideas are never fully outside our grasp, if we just engage in a little make-believe. 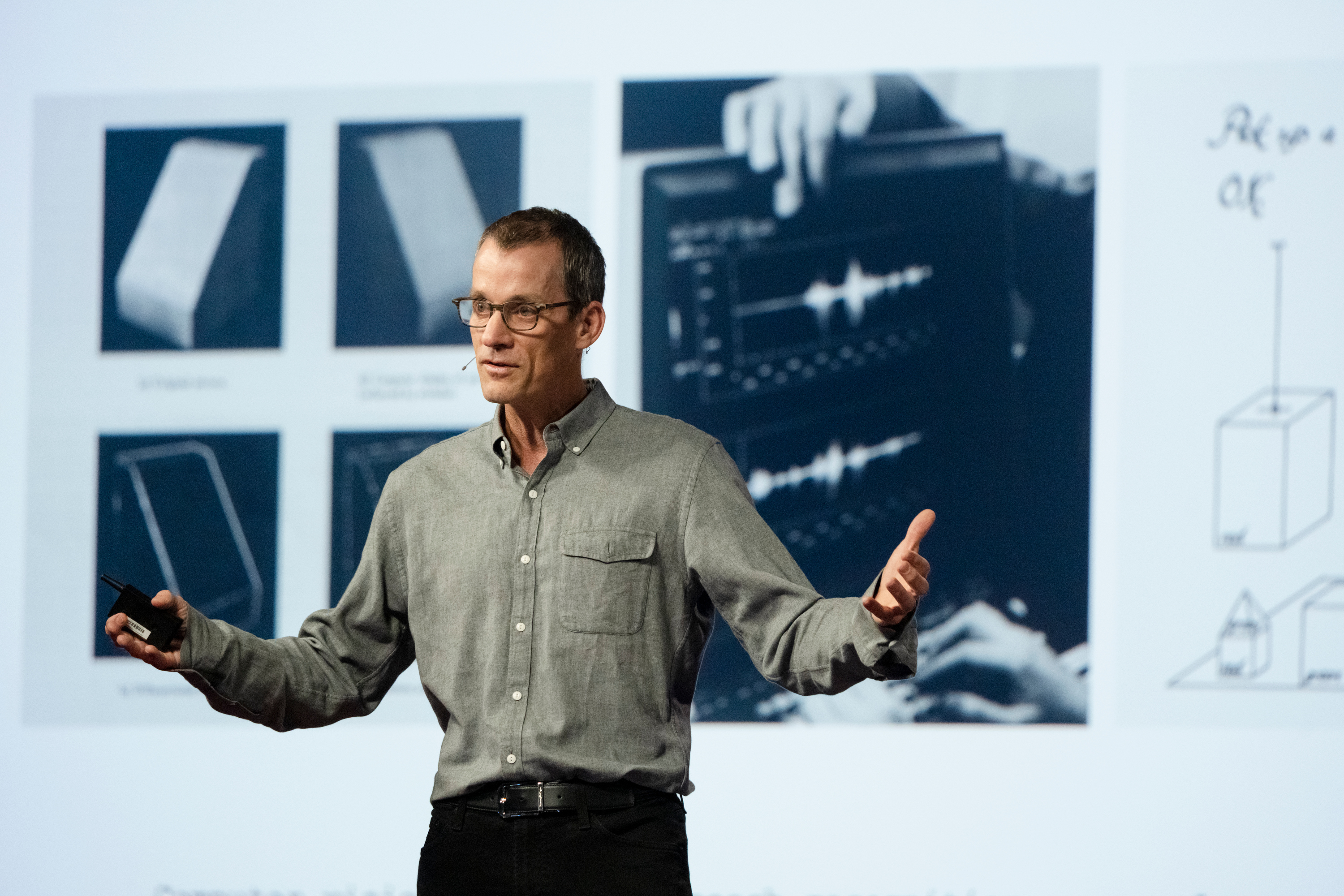 Jeff Dean unveils the next phase of Google’s artificial intelligence plans at TEDMonterey: The Case for Optimism on August 3, 2021. (Photo: Bret Hartman / TED)

Big idea: We’ve made tremendous progress in neural networks and computational power over the past two decades. But to achieve the full power of AI, we need to fix three key things.

How? Jeff Dean, the head of Google’s AI efforts, has been embedded in the world of artificial intelligence for decades. Despite the exponential evolution of neural networks and computational power, he thinks there are three key areas of focus still in need of fixing to realize the true potential of machine learning. First off: multi-task models. Whereas current AI systems are trained for specific tasks and learn new tasks from scratch each time — a multi-task model enables a system to do thousands of tasks and leverage that expertise to complete totally new tasks. Likewise, Dean believes we should train AI across images, text, sound and video simultaneously — rather than just one-by-one, as current systems do. Lastly, he advocates for “sparse models” (instead of current dense models, which activate a whole system for each task) that would only activate relevant parts for a given task (much like the human brain). Drawing on these ideas, Dean reveals publicly for the first time the next phase in Google’s AI plans: a new system called Pathways, which aims to generalize across millions of tasks and take a major step forward in how we build powerful, responsible artificial intelligence.

Big idea: Some of the most thoughtful, careful innovation is happening in rural areas — not in big cities.

How so? Taking us to small farms and villages across China and the US, Wang reveals how rural areas have become bastions of entrepreneurship, e-commerce and innovation — like a free-range chicken farmer in China who uses biometrics and blockchain to track the movement of his livestock through the supply chain and communities collaborating with blacksmiths to design new farming equipment. This kind of modernization doesn’t seek to scale to millions of users or raise VC funding, Wang says. Rather, its aim is more humble: to regenerate soil, maintain ecological balance and nurture community ties across generations — crucial steps toward building a livable future. 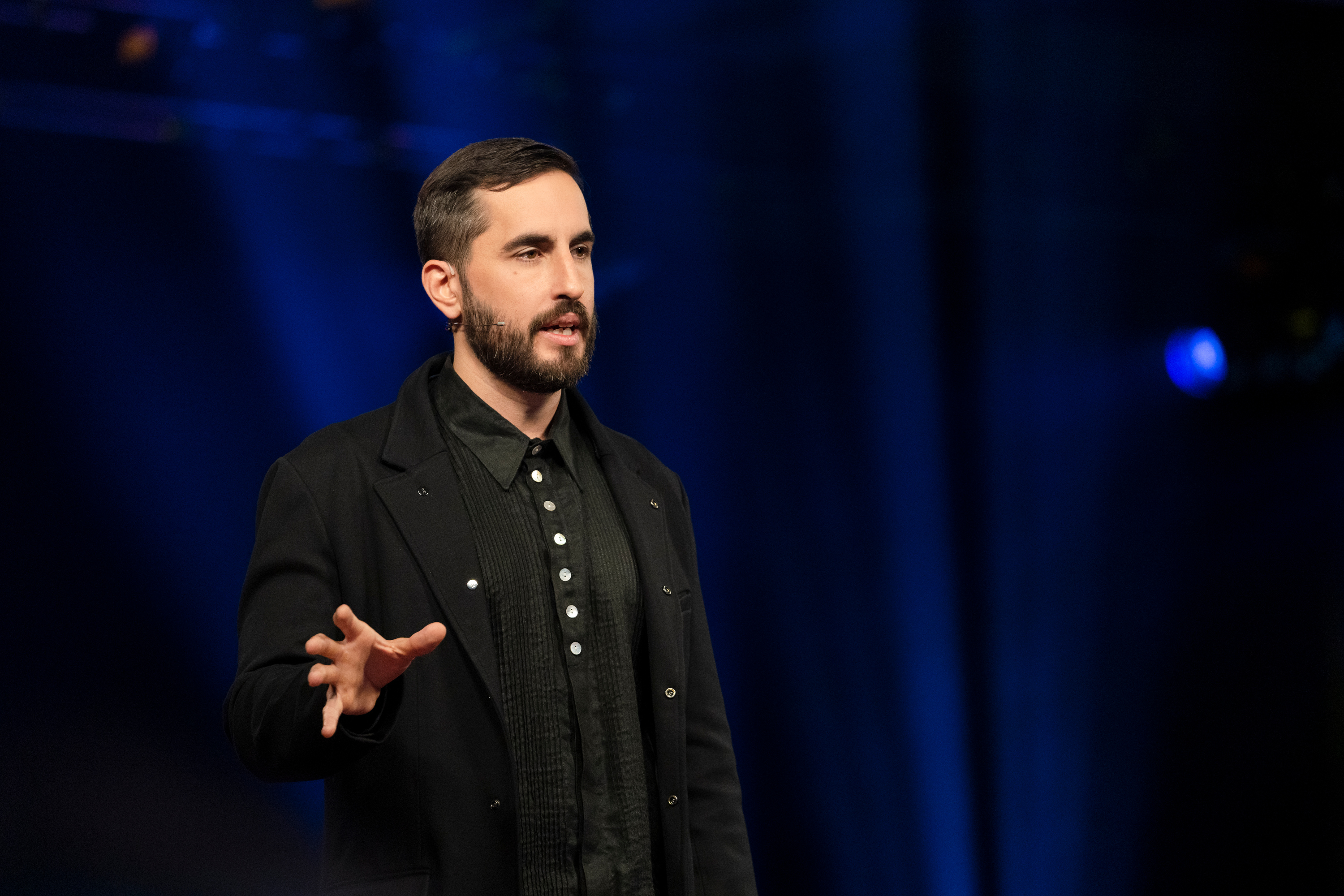 Big idea: NFTS aren’t a scam or a fad — they’re the future.

How? Much like the internet itself when it first entered the scene in the 1990s, many people today believe NFTs (non-fungible tokens) are a scam or a fad. Well, Kayvon Tehranian wants to clear the air: NFTs are here to stay. Just as the internet dissolved physical limits, so too do NFTs with economic boundaries. As a technological breakthrough, they put the power (and profit) back in the hands of content creators through certificates of ownership registered on the blockchain — acting, in many ways, similarly to a deed for a house — that accrue royalties as resold content becomes more desired, thus more expensive. It’s a brave new world reshaped beyond archaic copyright, one born from the spirit of the internet itself where creativity can be free, travel effortlessly and still pay despite the evolving digital landscape.

Big idea: We should apply the genetic tools at our disposal to save endangered species and restore biodiversity.

How? Elizabeth Ann is a cute, black-footed ferret native to the grasslands of North America. Kurt is a sturdy Przewalski’s horse, adapted for survival on the harsh Mongolian steppe. Both are genetic rescue clones helping to restore diversity to their extinction-threatened species. Ryan Phelan advocates for these cloned animals, which are created using the powerful tools of genomics and synthetic biology to reintroduce almost entirely extinct species back into the wild, diversify gene pools and edit DNA to help quicken adaptation to an increasingly changing environment. From genetically modified coral that’s more tolerant of warming waters, to a blight-resistant American Chestnut tree, Phelan introduces us to the many efforts around the globe aimed at restoring the Earth’s natural abundance and balance. With the success these programs have had over the years, one of the biggest challenges now is speed and public support. “We don’t have the luxury of time to stand by and wait to see what happens,” she says. “We can choose to create the future we want, not overreact to a future we fear.”