Asian Americans are facing a crisis. Random acts of violence against individuals have escalated, as the recent mass shootings in Atlanta and the wave of street attacks perpetrated particularly against older people have made clear. But beyond the headlines, as an online webinar on Thursday illuminated, the problem is deeper: centuries of entrenched racism, much of which has been fostered, if not engendered, by the media and the fears of white America.

“These conditions we are experiencing now are not new,” said Vivian Shaw, a Harvard College fellow and co-principal investigator of the AAPI COVID-19 Project, a partnership between the Department of Sociology and the United Nations Educational, Scientific and Cultural Organization (UNESCO). “They are embedded in the history of the U.S., in the history of racism, and the history of imperialism.”

“I hope today we can think about the histories that have led us to this point,” she said, convening the 90-minute symposium, which was sponsored by the Harvard University Asia Center, and co-sponsored by the Committee on Ethnicity, Migration, Rights​, Fairbank Center for Chinese Studies, Harvard-Yenching Institute, Korea Institute, Lakshmi Mittal and Family South Asia Institute, and Program on U.S.-Japan Relations, Weatherhead Center for International Affairs.

For Han Lu, a senior policy analyst at the National Employment Law Project, the current violence is part of larger systemic inequities. He linked the attacks to structural racism against other minorities and discussed the high rate of incarceration in this country, citing reports by the Brennan Center, among others. Highlighting the 500 percent increase in the incarcerated population over the past 20 years, he pointed out how funding priorities have shifted. “What’s happened in the criminal legal system is that housing, food, clean water, clean air, places to learn and make mistakes, and tools to do one’s work have [essentially] been replaced by prisons and various surveillance systems.”

Elena Shih, an assistant professor of American and ethnic studies at Brown University, examined a different angle on “state-sanctioned violence.” Kicking off with the Atlanta shootings, which targeted mostly Asian American women who worked at massage parlors, she noted that massage work is “one of the limited options for migrant, low-wage workers.” However, she added, because massage parlors may provide legal cover for sex work, employees are frequently targeted both by the police and by misguided groups that seek to “rescue Asian American victims while discounting the material needs of low-wage workers.” Even when sex work is involved, she argued, the agency of those involved should be respected. Citing groups such as Red Canary Song, a collective of Asian and migrant sex workers, she argued that too often what is labelled “trafficking” uses “highly racialized indicators of poverty.” These indicators include a lack of English language fluency or subjective factors as “provocative clothing” that point to Asian and migrant women as potential victims of trafficking.

“Workers are often arrested for the mere infraction of not having a license” for massage or body work, said Shih, referring to offenses that might otherwise only merit a fine. Without considering the agency of the workers, she added, “the media celebrates these ‘raid and rescue’ operations.” 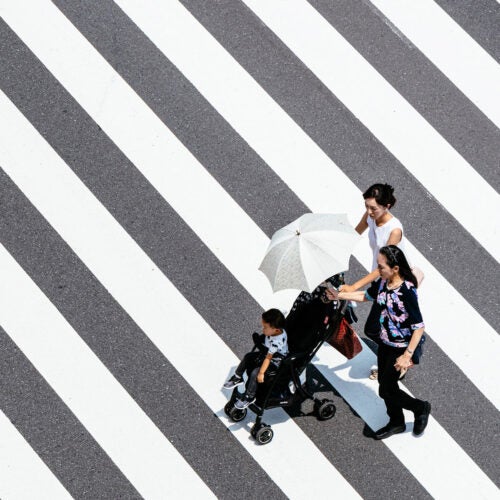 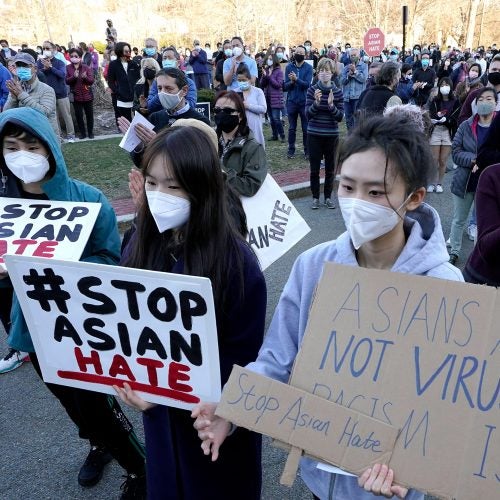 The scapegoating of Asian Americans

Rise of violence, harassment amid pandemic part of continuing tale of racism in U.S.

christina ong, a doctoral candidate in sociology at the University of Pittsburgh, presented a historical perspective. Drawing from her thesis, which she will be defending this spring, she discussed the community-based Asian American activism of New York’s Chinatown in the 1970s that coalesced in the Basement Workshop, a multifaceted collective of “artists, intellectuals, and activists” that was “inspired by the Black Power movement and the anti-Vietnam War movement.”

ong, a project manager on the AAPI COVID-19 project, discussed how the Basement Workshop created the Chinatown Health Fair, which evolved into a community clinic, and launched a magazine, The Bridge, that would call politicians to account. Showing part of a questionnaire sent to presidential candidates before the 1972 election, asking about U.S. involvement in Vietnam as well as views on immigration, she noted, “A lot of these are the same concerns that Asian Americans have today. You’d just have to change the candidates’ names.”

This historical perspective can help conceptualize the problem. As Lu, a former New Orleans public defender, recounted, “In Louisiana, Asian people were counted as white until about 1870, then it flipped back.”

That context, he said, proves the flimsiness of the idea of race, even by those who claim superiority. “Whiteness isn’t some abstract thing. It’s a historical alliance, sometimes defined against Catholicism, sometimes against Jewishness — and primarily against Blackness or Asian-ness.” Viewing it as a political construct can be useful, he advised. “Think of it as an object that can be dismantled.”