A growing number of Americans apparently believe that the Supreme Court needs to be reformed. The court’s approval rating, as cited in a Harvard panel this week, currently sits at around 60 percent — higher than Congress but lower than it’s been in many years.

The panel held Wednesday at Harvard Law School, “Reform of the Supreme Court?,” looked at current problems and possible fixes. Moderator Annette Gordon-Reed, the Carl M. Loeb University Professor of History at Harvard, questioned three legal scholars who identified different concerns about the court, including politicization to its unilateral power, and proposed solutions that ranged from term limits to expanded membership.

Linda Greenhouse, senior research scholar at Yale Law School, pointed out that the ideological divide in the Supreme Court is a fairly recent phenomenon. In the past, Republican Presidents Gerald Ford, Ronald Reagan, and George H.W. Bush could make relatively liberal choices in John Paul Stevens, Sandra Day O’Connor, and David Souter. But reaching across the aisle effectively ended with Stevens’ retirement in 2010. “What we then had was a court where all the more liberal members had been appointed by Democrats, and all the more conservative members by Republicans,” she said. Thus the public is somewhat justified in seeing the court as “nine politicians in robes, who are projecting their personal preferences onto the pages of U.S. Report,” she said.

University of Virginia Law Professor Saikrishna Prakash, who cited the above statistic, pointed out that the Supreme Court is still relatively well-regarded by the public, and that “most people don’t pay attention to what the court does.” More concerning, he said, is the lack of a ready mechanism to overturn judicial amendments to the Constitution.

“They hold the keys to the kingdom. That’s a problem that’s been there from the beginning: There has always been this issue about the courts being too independent.”

“In terms of broad public confidence, we’re not there yet,” added Larry Kramer, president of the William and Flora Hewlett Foundation. But he found real need for reform in the Supreme Court’s expanded power in popular political culture.

“To me the inflection point was the [former U.S. Solicitor General Robert] Bork hearings [in 1987]. The reason that was so powerful was that it got pushed to the public as, ‘Oh, my God — the next person who gets put on the court will decide your Constitutional rights once and for all, and will decide whether Roe v. Wade survives or not.’ That embrace of judicial supremacy was the new thing, and it raises the stakes in every appointment hugely.” As a result, he said, presidents now approach court appointments as “a means to expand their political power far past their term in office.”

Gordon-Reed asked what reforms the panelists would recommend. Prakash proposed a greater check on the court’s power: “There needs to be a check on the court’s decision-making after the fact, in the hands of Congress, the states, or some political responsible entity — so that justices don’t essentially have the power to remake the Constitution with five votes.”

Asked what this might look like, Prakash said, “Some sort of majority override of a judicial decision of the Supreme Court is entirely appropriate. I think there’s a need for the political branches to have some check on the court, and not have the court be the ultimate and final expositor of the Constitution.” 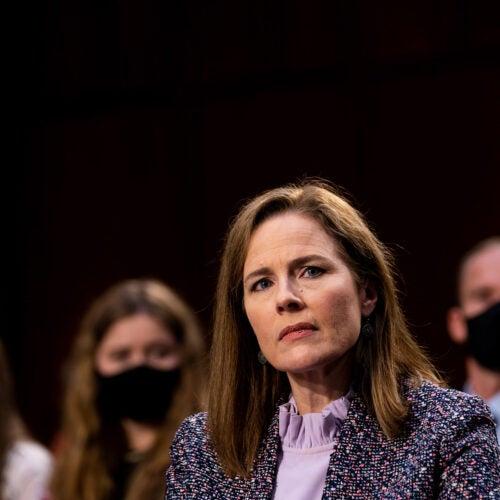 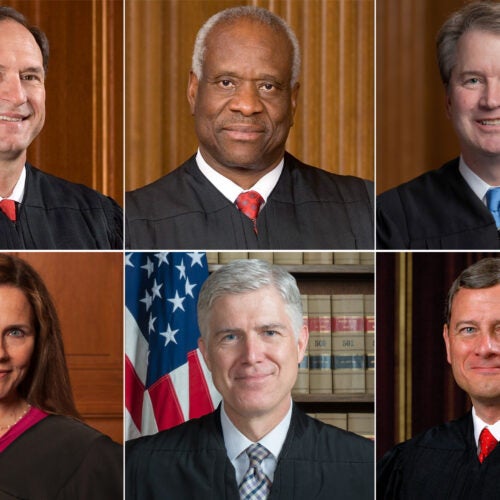 The conservative club that came to dominate the Supreme Court

In a new audiobook, Law School professor explores the rise of the Federalist Society and why its sway may be waning 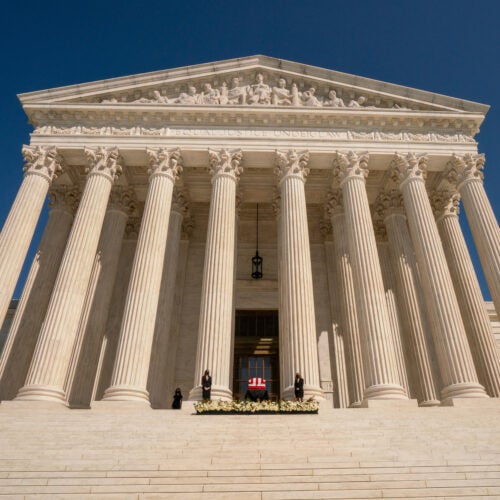 How far right will Trump’s nominee move the Supreme Court?

Kramer recommended a more sweeping reform. He endorsed the structural changes in the Carrington-Cramton proposal, designed by a professor from Cornell Law School and one from Duke. It would add one justice for every Congressional term, with the nine most junior ones deciding cases.

“I would be very happy with that. Neither party would gain a systematic advantage; it takes away the incentive to appoint your own people to the court because they’re going to be there forever. It solves the problems as I define them, which is trying to keep the court from becoming too out of whack with the rest of society,” Kramer said.

Greenhouse reminded the panel that even landmark Supreme Court decisions aren’t necessarily final. She cited Arkansas Gov. Asa Hutchinson’s recent attempts to outlaw abortion, in hopes the case will go back to the Court.

“There is nothing final. We have the court sitting out there as a foil, as a cover for politicians to do that kind of thing. But it tells us that the American public does not accept the finality of the court when it impinges on other preferences that they have. … Everything is always up for grabs.”