Migrants are arriving at the nation’s southern border in record numbers, fleeing violence and looking for what they hope will be a better life in the U.S. Overwhelmed by scale of the arrivals, the Biden administration has urged prospective migrants, most of them from Central America, to “stay home” for now, and put Vice President Kamala Harris in charge of resolving the crisis.

As part of her efforts, Harris has convened a “Partnership for Central America,” which brings together leaders in private industry, academia, and the nonprofit world to promote economic opportunity and address some of the root causes of the mass migration, with a focus on Guatemala, El Salvador, and Honduras. The Harvard T.H. Chan School of Public Healthhas joined the effort, lending the expertise of its faculty in key focus areas, such as public health access, climate adaptation, and food security.

The Gazette spoke with Harvard Chan School Dean Michelle Williams, who serves on the effort’s Leadership Council, about the work ahead.

GAZETTE: You’ve been named to the Leadership Council of the Partnership for Central America, Vice President Harris’ private-sector initiative to improve conditions and address a root cause of migration to the U.S. border region. Why is the Chan School’s participation in this important?

WILLIAMS: The pursuit of personal safety, sound nutrition, better education, adequate health care, and more are the fundamental reasons why people migrate. Those basic human needs — those fundamental public health needs — are what drive current migratory trends and must be addressed in order for any plan to have impact. The Harvard Chan School’s participation in the partnership is important because Harvard has a special responsibility to model how the science and practice of public health can be democratized in ways to help vulnerable populations flourish — through building cross-sectoral partnerships and serving alongside those in communities near and far. This is also a critical opportunity to add an evidence-based lens to this effort by harnessing scientific, performance, and health data to maximize the partnership’s capacity to measure and report its systems-wide impact. My desire is to intentionally unlock the formidable academic assets of our School and University in support of populations experiencing threats to their health and well-being.

GAZETTE: The initiative focuses on three countries, Honduras, Guatemala, and El Salvador. Does that capture the source of most of the migrants to the U.S. southern border?

WILLIAMS: It captures a good portion of the migrants coming to the U.S., excepting from Mexico. Approximately 311,000 people have left the Northern Triangle region each year since 2014 to come to the United States. The numbers fluctuate wildly, however: In fiscal 2019 an estimated 709,000 people left the region for the U.S., while last year that number came in at around 139,000, likely due to COVID-19. Due to the ongoing pandemic, approximately 34,000 of the nearly 226,000 Guatemalans, Hondurans, and Salvadorans encountered at the border so far this year have been unaccompanied minors, owing to the fact that the Biden administration has exempted them from immediate expulsion under Title 42, which was put in place by the Trump Administration during the beginning of the pandemic under the auspices of public health.

GAZETTE: What do you think are the driving factors in that decision and how will the partnership address problems that lead to the decision to migrate?

WILLIAMS: The Northern Triangle — Guatemala, Honduras, and El Salvador — has been hit by natural disasters,climate change, and has problems with violence, corruption, widespread poverty, high levels of malnutrition, low levels of education, low earning capacities, inadequate access to health care, and poverty that go back decades. All things that make this a huge public health crisis.

GAZETTE: How big are public health-related issues in that decision?

WILLIAMS: Health-related factors have a huge impact in the decision to migrate, and while Vice President Harris has already announced $310 million in funding to help with immediate food shortages and disaster recovery in the region, as I just stated, there are a large number of factors that have led to a huge public health crisis for this population. It is clear that this effort will need collaboration across multiple sectors. This cross-sector partnership will allow these communities to have greater understanding of these economies at stake and the power of self-reliance. Think about the banking sector working with the unbanked and providing technical assistance to farmers, improving health systems, job creation, violence prevention — health, public health, and economic resilience will be a co-benefit from all of these interventions. I think we have the opportunity to talk about the primacy of public health as the bedrock for economic growth and stability.

GAZETTE: There are many problems in the world that would benefit from public health leadership. Why did you choose this one to become involved in?

WILLIAMS: As a premier public health institution, the Harvard Chan School understands that we must solve urgent social problems by engaging in addressing causal factors — in this instance, factors upstream of the immediate border crisis. In fact, I would argue that we don’t have a border crisis, we have an inequity crisis. In order to address our issues at the border, we need to solve the root causes by advancing economic opportunity, addressing urgent climate, education, and health challenges, and promoting long-term investments and workforce capacity-building, especially for women and children. Second, the biggest threats to public health today require multiple disciplines and multisectoral engagement. This public-private partnership represents a tremendous opportunity to test, learn, iterate, and bring impactful interventions to scale. Vice President Harris, along with all the partners, has committed to working on the upstream drivers and being evidence-based. Additionally, the creation of a public health and development ecosystem, whereby students and fellows can learn by example, through supervised field/experiential learning, will prove to be invaluable on all fronts.

GAZETTE: How involved in the region are Chan School researchers already? Does this mean there will be deeper involvement? More studies?

GAZETTE: The issue of migration to the U.S. predated the pandemic, but how has the problem been affected by COVID-19? And can vaccines help?

WILLIAMS: One of our immediate commitments to the area is to support regional governments in addressing the impact of COVID-19 on their own populations. And vaccines will most certainly make a huge difference: On Monday, [June 21]the White House announced that it would be distributing 41 million vaccine doses with 14 million doses allocated for Latin America and the Caribbean, including the three Northern Triangle countries. Longer term, we want to help them build robust and resilient health economies to confront future health challenges; support access to clean water and sanitation; and ensure inclusive access to health care.

GAZETTE: Is this a known problem — where the factors causing migration are pretty well understood, albeit difficult to remedy — or is there still room for learning and surprises?

WILLIAMS: As I already mentioned, many of the factors causing migration are known and understood. But there is still much room for learning and surprise. There are always unknown factors when dealing with regional governments and populations, and those of us in public health need to be nimble enough to expect the unexpected.

GAZETTE: Is this a solvable problem? If not, what are the realistic expectations for the future?

WILLIAMS: None of us would be involved if we didn’t think this issue was solvable. But solvable is not the same thing as easy. I think we have to think in terms of goalposts: What does realistic success look like in Year One? Year Two? Year 10? Make no mistake, addressing this problem will require smart use of technology, a commitment to being evidence-based, and humility.

GAZETTE: If you were to offer a note of hope for this situation, what would it be?

WILLIAMS: I’m very hopeful that this partnership will bring a human face to the migration issue. I am hopeful that the world will see more clearly the factors that drive people away from their homes and that with that evidence, there will be an increased commitment to a public health and economic security agenda for all. The real people and the real stories behind the crisis so often get lost to sensational news headlines and political posturing. Focusing on the true day-to-day well-being of people in their home countries will have an enormous impact on all of us around the globe. I’m hopeful that by putting a human face on the problem, we are able to not only offset the factors that contribute to illegal migration, but also contribute to safer and healthier communities for all.

Interview was lightly edited for clarity and length. 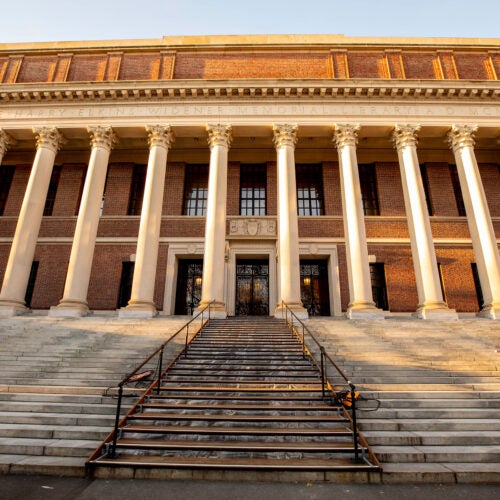 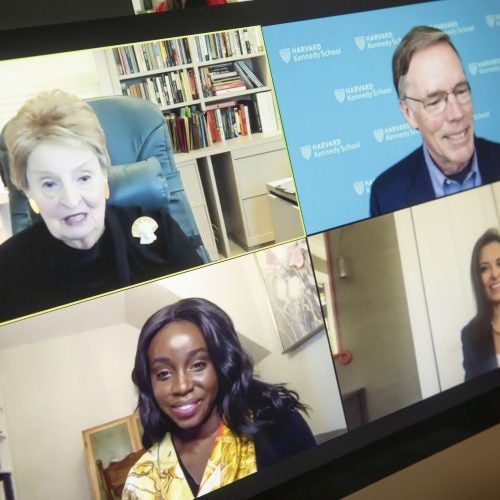 Defending those yearning to breathe free