University leaders were joined by state and local officials to unveil the four completely electric shuttles, which are replacing bio-diesel powered vehicles. The electric buses represent more than 30 percent of Harvard’s fleet.

Harvard President Larry Bacow described the campus as a “living laboratory where we can both experiment and demonstrate best practices.”

Emphasizing the city’s commitment to do “everything possible to combat climate change,” Cambridge Mayor Sumbul Siddiqui spoke of the University’s role as a true partner in the effort.

The shuttles, managed by Harvard Transportation Services, transport approximately 600,000 community members each year. The transition to electric power is expected to lower greenhouse gas emissions by more than 220,000 pounds annually while reducing air and noise pollution. This project is just one part of an aggressive effort to advance solutions for climate change, improve public health, and support the University’s goals of becoming fossil fuel-free by 2050 and fossil fuel-neutral by 2026.

“The transportation sector accounts for 42 percent of the greenhouse gases that are emitted in Massachusetts,” and partnerships with institutions such as Harvard are important for bringing newer, cleaner vehicles to the commonwealth, said Deputy Commissioner for Policy and Planning Stephanie Cooper of the Massachusetts Department of Environmental Protection.

The University’s electric buses were made possible through a MassDEP grant program, which is funding nearly 100 projects across Massachusetts to help electrify the transportation sector. In addition, a loan from the Harvard Green Revolving Fund enabled investment in the charging infrastructure necessary to support the new buses. 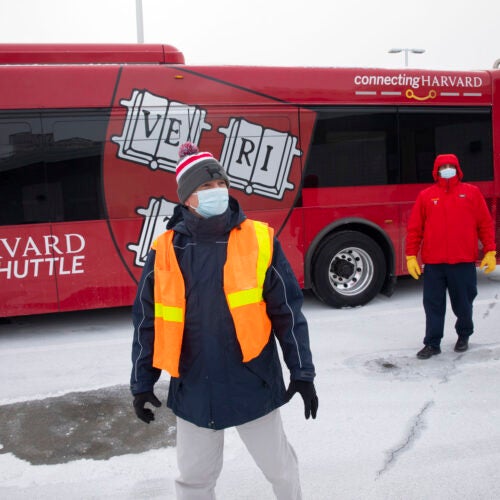 On the road to a fossil fuel-free future