Brace yourself for another COVID surge — and mask up, say experts

Even as coronavirus cases slide nationally, Harvard experts are warning the public to keep its guard up because more highly transmissible variants are likely to reverse that decline in the weeks to come, with one recently arrived strain already accounting for 10 percent of cases in Florida.

Atul Gawande, professor of surgery at Harvard Medical School and Cynthia and John F. Fish Distinguished Chair in Surgery, Brigham and Women’s Hospital, said that recent actions in Iowa, North Dakota, and Wisconsin to relax mask mandates are coming too soon despite cases declining nationally to just 91,000 a day last week from an early January peak of more than 300,000 new cases per day.

Gawande, on a conference call with reporters Tuesday, cited a study released over the weekend by researchers from the University of California, Scripps Research Institute, and the University of Arizona that performed a genetic analysis of viral samples across the country in search of a fast-spreading strain that has become dominant in the U.K. They found that the strain, referred to as B.1.1.7, appeared in U.S. samples as early as late November and has spread to 30 states. They also found that the variant increases transmission rates by between 35 percent and 45 percent, causing cases to double every week and a half. The researchers projected that it will become the dominant strain here in March.

Though the U.S. vaccination campaign is forging ahead, with 32 million Americans having received at least one dose, Gawande said the speed of the new variant’s spread appears almost certain to outstrip that of the vaccination effort. In Israel, he said, 50 percent of the population has been vaccinated, but with the U.K. variant at 50 percent of cases, hospitalizations continue to rise. Unless mitigation efforts here are stepped up to counter the new strain’s increased infectivity, he said, a now-familiar pattern can be expected: a spike in cases followed within weeks by a jump in hospitalizations, then a surge in deaths.

“The doubling rate is every 10 days, so that’s very concerning — extremely concerning,” said Gawande, also a professor of health policy and management at the Harvard T.H. Chan School of Public Health. “We have a nicely falling rate of hospitalizations, cases, and deaths, but then we’re seeing a rising number of [B.1.1.7.] cases. We know what happens. Two to three weeks after that we see a rising number of B.1.1.7 related hospitalizations, and then we will see deaths to follow.”

Gawande said that, contrary to the actions in the three Midwestern states, mask mandates should be the last precaution removed when cases start falling, not the first. He recommended that prevention and mitigation strategies continue and that every American upgrade from cloth to “medical grade” masks.

Gawande’s call on masks echoes that of Joseph Allen, associate professor of exposure assessment science at the Harvard Chan School. Allen said last week that all Americans should be upgrading to N95 respirators or the equivalent. Early in the pandemic officials recommended that the public rely on cloth or paper surgical masks to reserve N95s for first responders, but now — particularly with highly infectious variants emerging — people should be routinely wearing N95 respirators, which remove 95 percent of viral particles.

Though N95s should be abundant by now, Allen acknowledged that even a year into the pandemic, supply hasn’t caught up to demand. Equivalent masks imported from overseas can also be effective, he said, including the South Korean-made KF94 and the Chinese-made KN95, although Allen cautioned that less-effective KN95 knockoffs are also being sold. If those masks are not available, Allen recommended double-masking, using a surgical mask because of its greater filtration properties with a close-fitting cloth mask on top. The cloth mask’s fit, he said, should improve the surgical mask’s filtration by closing gaps around the nose and at the corners of the mouth. That combination, he said, should boost the masks’ screening ability to about 70 percent. The effect is additive, he said, and two people double-masking should reduce particles by 90 percent, while adding in appropriate distancing can provide 99 percent effectiveness.

With the variants now spreading in the U.S., Allen, long a proponent of in-person schooling, said it is critically important that schools crack down on lax mask wearing and hand sanitizing, and re-examine ventilation and/or filtration of classroom air, so that they’re achieving the recommended four to six air changes per hour. With the new variant, he said, luck may run out for schools that have not had rigorous protocols in place but nonetheless have seen few cases.

“I think the margin for getting lucky is about to shrink,” Allen said. “It really has become crystal clear what needs to be done.”

How COVID experiences will reshape the workplace 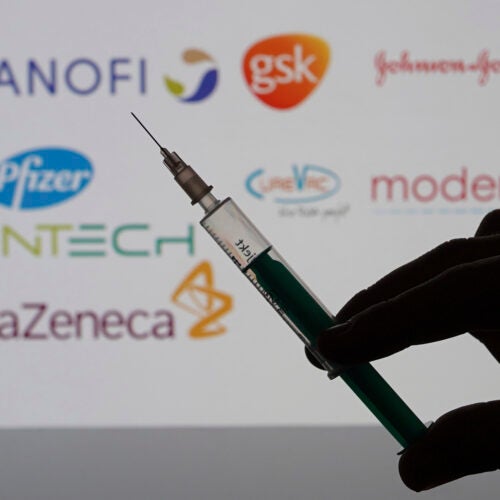 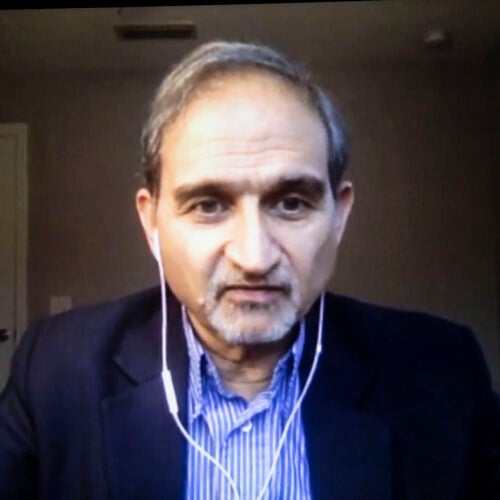 Though B.1.1.7 is projected to become the dominant strain in the U.S. in just a few weeks, it’s not the only one. At the end of January, results of the phase 3 clinical trial announced by Johnson & Johnson crystallized concern about a variant in South Africa. While the vaccine was 72 percent effective in preventing moderate to severe illness in the U.S., that number was just 57 percent in South Africa, likely due to the prevalence there of a virus strain believed to both spread more quickly and partially evade immune protection. The good news about the Johnson & Johnson vaccine, developed in the Beth Israel Deaconess Medical Center lab of Harvard Medical School Professor Dan Barouch, is that it proved 85 percent effective against severe disease, which should ease the strain on health care facilities. The hazard of immune-evading variants was illustrated this week, when South Africa decided to halt distribution of an AstraZeneca vaccine due to ineffectiveness.

In a late January interview, Barouch called the pandemic landscape “more complicated” today and said that Johnson & Johnson is testing whether a second dose would increase the single-shot vaccine’s effectiveness further — both the Pfizer and Moderna vaccines are delivered in two doses. In addition, he’s getting back to work, saying that his lab is looking “very closely” at how to modify the vaccine so it is more effective against the new variants.

The variants’ impact has pandemic experts revising estimates of when life will return to whatever post-pandemic “normal” looks like. Anthony Fauci, the nation’s top infectious disease doctor and a top Biden coronavirus adviser, in December projected that enough Americans would be vaccinated by summer’s end that some sort of “normality that is close to where we were before” would occur by the end of the year. Recent news about the rise of coronavirus variants has made even Fauci uncertain about the pandemic’s end, telling The Washington Post this month that he had no “definitive answer” to the question of when normalcy might return.