An invitation to join a special new membership at TED. Learn more at ted.com/membership 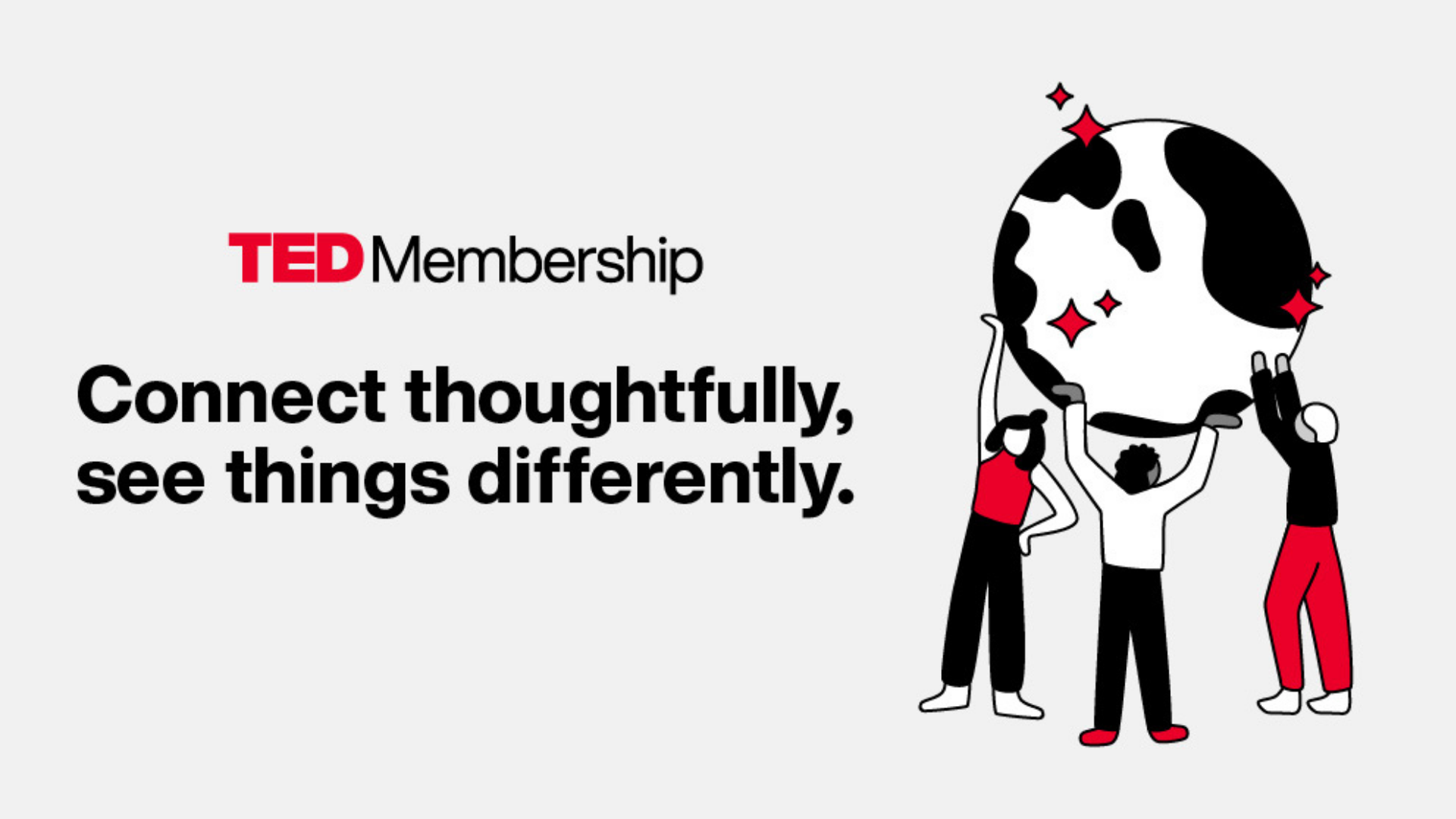 First of all, thank you for watching TED Talks. We’d be nothing without our global community of lifelong learners.

We have something new and truly special to offer you. A membership that can take your engagement with TED to a whole new level:

We’re creating these special new features of TED as a way to connect more deeply with our most dedicated fans. TED is a nonprofit. The pandemic has cancelled our conferences and forced cuts on our sponsoring partners. So for the first time in our 34-year history, we’re turning to you, our global online audience, to ask you to consider supporting TED financially. We’re suggesting a monthly contribution of $5. If this is unaffordable right now, you can choose to pay whatever you wish. Your contribution will make a huge difference to our ability to present ideas that matter — in short videos, podcasts, animated lessons, and TV programs, translated into 100+ languages and distributed worldwide. It will also enable our ability to support more than 3,000 independently run TEDx events on every continent as well as TED initiatives that contribute to sharing ideas to a global audience. Every dollar we receive is reinvested in this mission.

So please consider giving this a try. There will be special events with stars from the TED stage, including neuroscientist Lisa Genova, author Pico Iyer, media trailblazer Pat Mitchell and photographer Angélica Dass. We’ll host intimate conversations with changemakers like Reshma Saujani, founder/CEO of Girls Who Code, and Tshering Tobgay, president of the People’s Democratic Party in Bhutan. For a peek at the calendar for the next few weeks, look here. These are experiences you won’t want to miss.

You can become a member here and cancel anytime.

Thanks for listening. I hope to see you face-to-face online in the very near future!

Have you ever painstakingly crafted a budget only to wildly overspend on your next outing? Or bought something that you instantly regretted but couldn’t return? Managing your money can get complicated — but it doesn’t have to be.

In TED’s video series Your Money and Your Mind with Wendy De La Rosa, behavioral economist Wendy De La Rosa explains why we spend too much and save too little (even when we know better) — and shares easy steps and practical tips to help you achieve a more secure financial future.

In eight brief, informative episodes, De La Rosa explores the tricky relationship between human behavior and money. Considering the psychological, emotional, cultural and social factors that influence money decisions, she walks you through how to gain control over your finances, so you can gain peace of mind.

De La Rosa sheds light on the purchases we often end up regretting and explains why traditional budgets don’t work for most people. She offers a guide on how to talk about money with your partner, 4 steps to pay off your credit card debt faster, 3 ways to evade the sneaky (borderline predatory) practices of websites and a 2-step plan on saving more money.

What purchases do we often regret? And why do we keep buying them?

Here’s why (and how) you should talk to your partner about money:

It’s not you, it’s your budget. Do this instead:

4 ways to get out from under your credit card debit:

Are you saving? Good. Here’s how to save more:

Websites are sneaky. Be sneakier:

Keeping up with the Joneses might actually be good for your wallet:

Take a financial health day and complete these 10 easy steps:

CHICAGO — A 79-year-old man crashed his car into a building on Chicago’s Northwest Side Saturday afternoon after experiencing a medical emergency, according to police.

Police said the man was traveling southbound in the 3200 block of North Nottingham Avenue just after 2:05 p.m. in a SUV when he experienced a medical emergency and struck two parked vehicles on the east side of the street.

The vehicle then came to a rest after striking a building in the 7000 block of West Belmont Avenue.

The driver sustained a spinal injury and was transported to Loyola Hospital for treatment. No citations were issued.

CHICAGO — Two teens were injured in a drive-by shooting in Chicago’s Brighton Park neighborhood Saturday afternoon, according to police.

Police said a 19-year-old man and a 17-year-old boy were on the sidewalk in the 4400 block of South Homan Avenue at approximately 4:20 p.m. when a light-colored SUV pulled up and an occupant opened fire.

The 19-year-old man sustained a gunshot wound to the left leg and was transported to Mount Sinai Hospital.

The 17-year-old boy was also shot in the left leg and was transported to Mount Sinai Hospital.

The condition of the victims is currently unknown and the incident is under investigation.

First responders arrived in the 7600 block of South Kostner Avenue at approximately 12:30 p.m. with crews treating some people at the scene.

A child and two adults were transported to Holy Cross Hospital in fair-to-serious condition, with two adults at the scene refusing medical attention.

Officials said the fire was contained to one apartment.

BOWLING GREEN, Ohio (NewsNation Now) — A Bowling Green State University student is “in the process of donating his organs,” a lawyer for the family told NewsNation Saturday, after an “alleged hazing” incident.

The fraternity on the campus is on an interim suspension after 20-year-old Stone Foltz was hospitalized in an alcohol-related incident.

“For now, Stone is still with us,” attorney Sean Alto told NewsNation, saying he expects an update on Sunday. “The nature of the hazing incident is still being investigated but I can tell you that it involved a large quantity of alcohol consumed in a very short period of time during a fraternity pledge event.”

The university said it was working with law enforcement investigating Pi Kappa Alpha in what the fraternity’s parent organization called “an alleged incident of alcohol-related hazing at an off-campus event” that left officials “horrified and outraged.”

The parent organization said the case involved “a student and an unreported new member” of the Delta Beta chapter. The Toledo Blade reports that the term refers to someone who has not gone through the initiation process, and the student was seeking to join the fraternity commonly known as “Pike.”

“This tragic incident has certainly impacted our students and community,” the university said on Twitter, adding that officials were meeting with student leaders “to decide the short- and long-term future of fraternity and sorority life” at the school.

“In the days to come, we will also be reviewing all other student organizations,” the university said.

Officials also urged people to moderate their comments and not share “potentially misleading” details on social media, saying the hospitalized student’s family and friends “are living every loved one’s worst nightmare, and we owe them the utmost respect and privacy at this time.”

“The fraternity has a zero-tolerance policy toward illegal activity, substance abuse, bullying, and hazing of any kind,” the Memphis, Tennessee-based parent organization said in a statement. “Let us reiterate in the strongest terms: We refuse to defend or condone any behavior that creates dangerous environments or situations for our members or the larger campus community at any of our 200-plus chapters in the United States and abroad.”

Bowling Green State University’s issued a statement regarding the incident:

“Bowling Green State University is aware of alleged hazing activity involving alcohol consumption at a Pi Kappa Alpha off-campus event on March 4. We have placed this fraternity on interim suspension as we work with local law enforcement, who are actively taking the lead in investigating this serious situation. We want to express our care and support of our students and community affected.”

This is the second incident of a suspected alcohol-related hazing at a fraternity event in less than a week.

His family suspected he was hazed during initiation.

The Associated Press contributed to this report.

COLUMBUS – They were in a tight, grind-out fight over the course of 40 minutes in arguably the best conference in college basketball this season. This is how it’s been for Brad Underwood’s team for most of the 2020-2021 campaign, so why should it change in their finale.

This time it was Ohio State that was the opponent for a memorable contest that went all the way down to the final minute. That’s happened a few times for Illinois this season, and it’s fitting that the finish mimicked a lot of their results over the past four months.

With Ayo Dosunmu back in the lineup after missing three games due to a facial injury, the Illini rallied back from four points down late to beat the Buckeyes 73-68 on Saturday afternoon in Columubus.

Fittingly, it was the National Players of the Year candidate that put the Illini ahead to stay with a three-point play on a layup with 44 seconds to go. Two more free throws finished off his 19 point effort, which was tied for the best on the team with Andre Curbelo.

It kicked off a major and now common postgame celebration for the Illini in the locker room at Value City Arena. The victory was the third-straight for Illinois and the second-straight against a Top Ten opponent, having beaten second-ranked Michigan Tuesday.

This was just one part of an incredible stretch of basketball for Brad Underwood’s team that began after a loss to Ohio State in Champaign on January 16th. After that, the Illini finished the regular season 11-1 with five wins over Top 25 teams.

While it may not have been enough to get the program their first Big Ten regular season championship since 2005, it probably got them their highest seed since that season. Many expect Illinois to be a No. 1 seed after their late season run, but at the worst would get at No. 2 even with a quick exit from the NCAA Tournament.

That’s certainly worth a celebration after another hard-fought game went their way this winter.

CHICAGO — No injuries were reported following a fire at a commercial and residential building in Chicago’s McKinley Park neighborhood Saturday night, according to fire officials.

First responders arrived at the fire at 3643 South Blake Street just before 6:30 p.m. and were able to get the fire under control shortly after 7:00 p.m.

Crews arrived back on the scene just before 10:00 p.m. as the fire had began again, with fire officials confirming no one was inside the building.

The cause of the fire is currently unknown.

CHICAGO — A Polar Plunge at St. Patrick’s in Chicago’s Portage Park neighborhood took on a new perspective this year in the COVID-19 pandemic.

“We couldn’t do it at the lake this year, like traditionally, so instead we had everyone who signed up and raised money come down to the field so we could host it in some capacity,” Jonas Dargis of St. Patrick’s Junior said.

Dargis and Mason Kim are leaders on this team, working to raise money for Special Olympics Chicago.

“It’s a really good way to help people who don’t have the same opportunities as us,” Kim said.

For five years, members of St. Pat’s have taken part in the annual Polar Plunge at North Avenue Beach, which has taken on a new twist this year.

In lieu of the usual huge one-day event, all the participating teams across the area are doing their own challenges throughout the past week.

On the South Side, Team Fahey had their own take on this tradition in the parking lot of St. Barnabas School.

Back at St. Pat’s, their obstacle course with a ball toss and push-ups ends with an icy splash.

“This is the highest collection in the five years we’ve been doing this,” St. Pat’s Assistant Principal Christopher Perez said.

This error message is only visible to WordPress admins