Out of the blue on November 19, news channels began flashing the news of an airstrike by Indian forces in Pakistan-occupied Kashmir. Channels scrambled to organise panel discussions to accompany this “breaking news”.

A PTI report was the main source for these broadcasts, calling it “pinpoint strikes” by India on “terror launchpads”. Soon after, however, the Indian army itself refuted these claims. Lieutenant General Paramjit Singh, the Indian army director-general of military operations, said: “Reports of Indian army’s action in Pakistan-occupied Kashmir (PoK) across the Line of Control are fake.”

It later turned out that the PTI story was based on an “analysis of ceasefire violations” that had taken place on November 13.

Spoke to senior Indian Army officials. They have denied @PTI_News report on so called air strike inside PoK. âThe PTI story is based on analysis of the Ceasefire Violations (CFV) that took place on 13th November. It is clarified that there has been NO firing or CFV in LoC today.â

Several media outlets are claiming that the Indian Armed Forces carried out strikes on suspected terror launch pads across the #LOC.#PIBFactCheck: This claim is #Fake. There has been no firing across the LOC today. pic.twitter.com/oeIRujRY9Z

News channels stepped back on their coverage, but many of them had already managed to stir up a frenzy within that short period of time. They were supported in this endeavour by news reports in several leading publications.

This incident spotlights the media’s problems with reporting on military issues. While hurrying to “break” news, basic journalistic practices like verifying the news fell by the wayside. News channels could have contacted military spokespersons, or the defence ministry, or the external affairs ministry.

Which is why, at around 7 pm on November 19, Aaj Tak, ABP News, Times Now and Republic Bharat, among others, were crowded with chatter about these so-called airstrikes.

On Aaj Tak, Rohit Sardana said — or screamed — and there was “big news at this hour”. “India has done another airstrike on Pakistan’s terrorists,” Sardana proclaimed.

Times Now ran unverified visuals of the location of these purported strikes, while two senior members of the channel discussed them at length. ABP News credited Narendra Modi for the strikes, saying it was “another big success for Modi Sarkar, for the Indian military”. 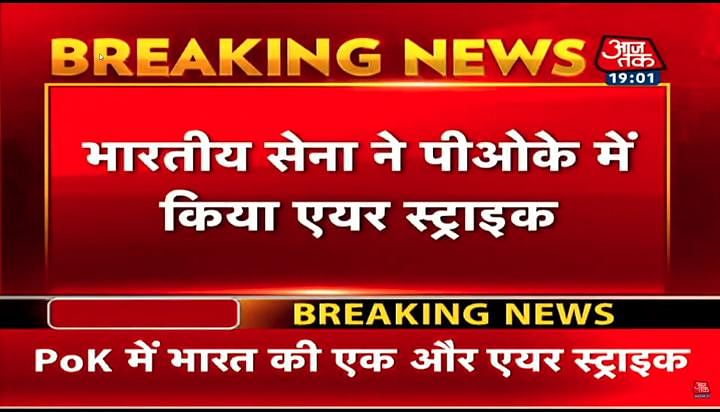 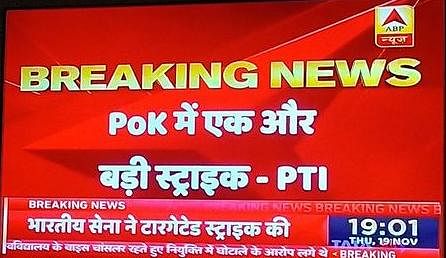 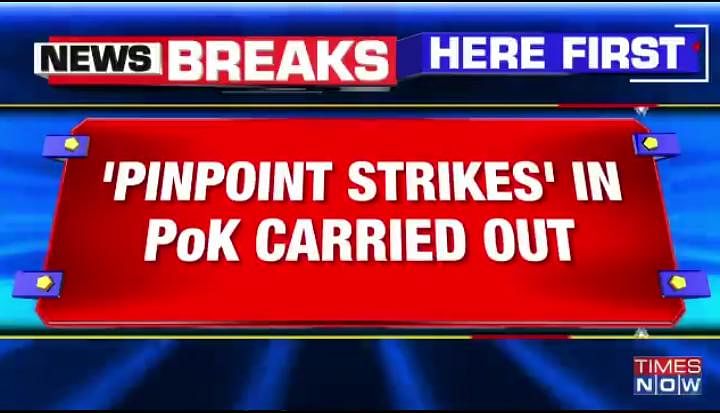 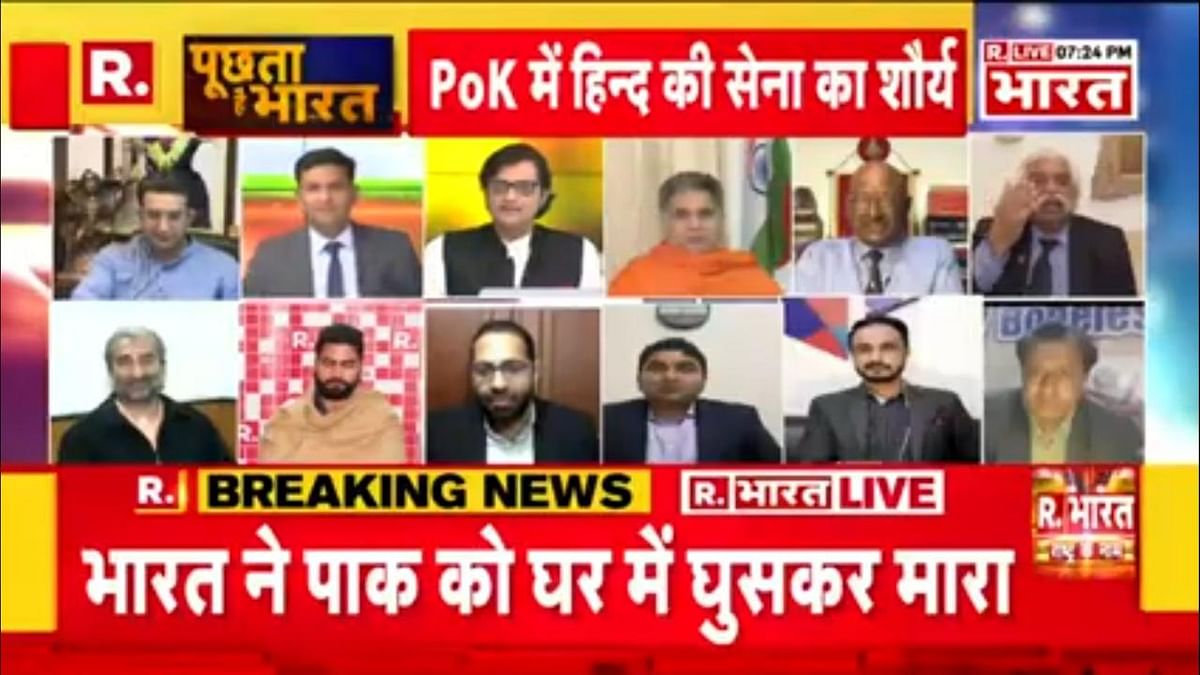 Some of the anchors on these channels also tried to outdo each other in brandishing their nationalistic credentials on Twitter. Aaj Tak’s Anjana Om Kashyap tweeted the “news” with an emoji of the Indian flag. She deleted the tweet an hour later, saying that the military had “refuted any claims of a strike”.

News Nation’s Deepak Chaurasia followed the same pattern, though his tweet took it a step further. He said: “India’s biggest airstrike yet in PoK, many terror centres destroyed, the operation on army’s soldiers is a success.” Fifteen minutes later, Chaurasia deleted his tweet and subsequently tweeted about it being “PTI news” — though his original tweet had not attributed it to PTI. 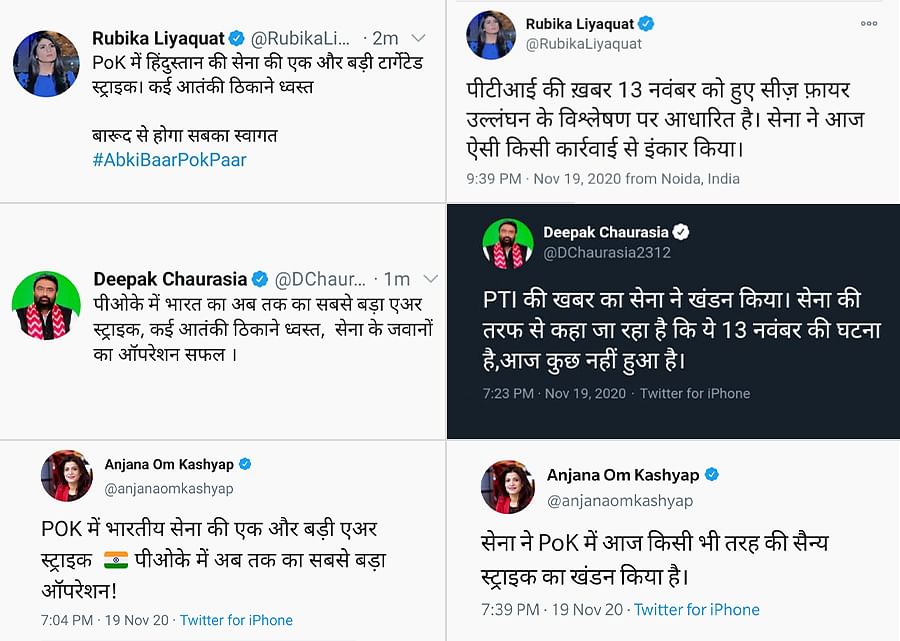 ABP News’s Rubika Liyaquat’s excitement knew no bounds: she started a hashtag #AbkiBaarPokPaar to accompany her tweet on how “terrorist locations” were “destroyed” in Pakistan-occupied Kashmir. “All would be welcomed by gunpowder,” she exulted.

So, in this race for ratings and revenue, channels and their anchors first pushed unverified news and then backtracked — without apologising. PTI shouldered all the blame instead. Unsurprisingly, a hashtag began trending in Hindi on Twitter, demanding apologies from “fake media”.

It’s unlikely that apology is forthcoming.

A version of this story was first published in Newslaundry Hindi. It was translated from Hindi by Shardool Katyayan.

The media must be free and fair, uninfluenced by corporate or state interests. That’s why you, the public, need to pay to keep news free. Support independent media by subscribing to Newslaundry today.

Also Read : ‘Over 300 casualties’ in Balakot airstrikes, but who’s the ‘source’?